Frerea was first discovered at Shivneri Fort in Maharashtra's Junnar region of Pune district in the year 1865. This plant will be officially named Shiv Suman because of the location. 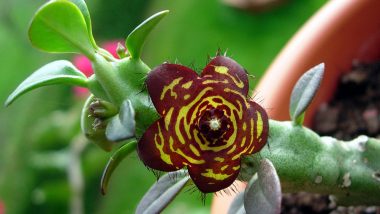 A critically-endangered plant named Frerea was first discovered at Shivneri Fort in Maharashtra's Junnar region of Pune district in the year 1865. This plant will be officially named Shiv Suman because of the location. It is a greenhouse plant species and was on the  IUCN list of twelve most endangered species on earth. This plant was first documented by British botanist Nicol Alexander Dalzel back in the 18th century. 596 New Species of Plant and Animals Discovered in India in the Year 2018.

About 30 NGOs, representatives of the forest department, Pune Municipal Corporation and the Botanical Survey of India (BSI) have decided to adopt a local name for the species. The other name for this is Shindel Makudi. Now a formal christening will take place in the month of August. A workshop will be organised by BSI, the forest department, scientists and NGOs. There were several conservation efforts held to bring back the plant from its extinction state. The new name Shiv Suman represents Chhatrapati Shivaji Maharaj and flower.

Talking about the local name, Sachin Punekar, founder of Biospheres was quoted in TOI, "It was collectively decided to adopt Shiv Suman as the name of the plant in a bid to commemorate the Maratha king and bring about standardisation in local vernacular names of plant species." This plant is found in the northwestern region of Western Ghats in Nashik, Satara, Raigad, Pune and Ahmednagar districts. A study by the Botanical Survey of India in 2010 concluded that the plant is no longer endangered. Aloe Vera, Peace Lily and Boston Ferns: 7 Indoor Plants That Will Keep Your Home Pollutant Free.

After the official renaming, the plant will be known by its Marathi name. This plant is fleshy perennial succulent with 50 cm (20 in) long branches. The flowers are coloured in shades of crimson to cherry-red flowers are star-shaped with yellow markings. It blooms in the months of August to September.

(The above story first appeared on LatestLY on Jun 21, 2019 12:53 PM IST. For more news and updates on politics, world, sports, entertainment and lifestyle, log on to our website latestly.com).