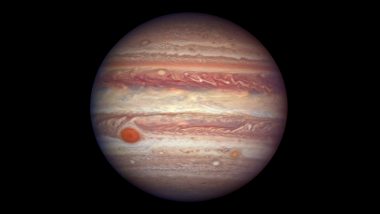 Strange FM signal from Jupiter's moon Ganymede has been discovered By NASA Spacecraft Juno. NASA's Ambassador to Utah, Patrick Wiggins recently revealed that the space agency has detected FM signal from one of Jupiter's moon. However, they have clarified that it has nothing to do with ET aka Extraterrestrial Life. They also revealed that it is natural. NASA has now decided to continue with two of its planetary discovery missions, including Juno. The FM signal was discovered from Ganymede which is one of the Jupiter's moons and its planetary discovery missions, including the Juno mission to Jupiter continues. Alien Tech Has Visited The Earth? Harvard Professor States Space Object 'Oumuamua' Was Alien Debris, Know All About It!

Juno has discovered an FM signal Ganymede's moon and while conspiracy theorists may link it with ET, NASA has clarified that it is not.  "It’s not E.T.," Patrick Wiggins, one of NASA’s ambassadors to Utah, said in comments obtained by Fox 8 Cleveland. "It’s more of a natural function."

According to Geophysical Research Letter Ganymede‐Induced Decametric Radio Emission: In Situ Observations and Measurements by Juno "At Jupiter, part of the auroral radio emissions are induced by the Galilean moons Io, Europa, and Ganymede. Until now, they have been remotely detected, using ground‐based radio telescopes or electric antennas aboard spacecraft."

The spacecraft, which launched in 2011, happened to be travelling across Jupiter's polar region at a speed of 111,847 mph when it crossed the radio source, known as a "decametric radio emission," or simply Wi-Fi. It saw the radio emission for only five seconds, but it was enough time to confirm the source. According to NASA, the decametric radio waves have frequencies between 10 and 40 MHz, but never above 40 MHz. "Electrons spiralling in Jupiter's magnetic field are thought to be the cause of the radio noise we hear," the space agency added.

Scientists have known about radio waves on Jupiter since the mid-1950s, but this is the first time the phenomenon has ever been seen emanating from Ganymede. The findings were recently published in the scientific journal Geophysical Research Letters.

(The above story first appeared on LatestLY on Jan 14, 2021 06:00 PM IST. For more news and updates on politics, world, sports, entertainment and lifestyle, log on to our website latestly.com).