'Freak Snake' Found in Virginia Turns Out to Be Invasive Worm Species That Cannot be Killed; Know Everything About Hammerhead Worms and Are They Dangerous?

The reptile misidentified as a 'snake' turned out to be a hammerhead flat worm it has been revealed. And these are invasive species had invaded France a couple of years ago. They can regenerate on their own, practically immortal as they are difficult to kill. 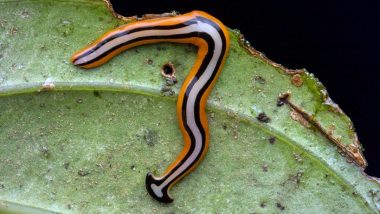 A sighting of a snake can give many the creepy feeling, and more so when it does not look like a regular snake. Last month, a pest control service in Virginia got a call about some weird-looking snake. The Virginia Wildlife Management and Control received a call from Midlothian outside Richmond. They too were not sure about this creature and mentioned it as a "freak of nature." But the reptile misidentified as a 'snake' turned out to be a hammerhead flat worm it has been revealed. And these are invasive species had invaded France a couple of years ago. They can regenerate on their own, practically immortal as they are difficult to kill. So should you be worried about another creepy crawly getting closer, not really. In this article, we tell you more about flathead worms. Cicadas Seen in US First Time in 17 Years! Know If They Are Dangerous And Everything About These Periodical Insects 'Wailing Like Aliens'.

Virginia Wildlife Management and Control posted photos of the creature on their Facebook page recently. It was later updated that the supposed snake wasn't a snake at all but an invasive worm species. As per Charlotte Observer, quoting experts they identified it as a flatworm which is native to Southeast Asia. They are scientifically called Bipalium and are an invasive species which can regenerate on their own. Their regeneration makes it difficult for them to be killed as well. So should you be worried? A few days ago, hairy venomous caterpillars were also spotted in Virginia.

What Are Hammerhead Flatworms? Are They Dangerous?

Bipalium are genus of large land flatworms. They are called "hammerhead worms" or "broadhead planarians" because their heads have a distinctive shape of a hammer. They are predatory and prey on earthworms or mollusks. They have sticky secretions which prevent their prey from making an escape. They are hermaphroditic creatures, meaning having both male and female reproductive organs. As per one report in LiveScience, flatworms have an extraordinary superpower as they could regenerate. If they are cut to bits and pieces, they can regrow into new worms, that even a 1/300 size could still regrow into complete worms. So cutting them into two will not kill but help them regenerate. They are not dangerous to humans or do not attack humans. But they can pose an ecological damage since they prey on earthworms, which play an important role as fertilizing the soils.

(The above story first appeared on LatestLY on Nov 09, 2020 08:36 PM IST. For more news and updates on politics, world, sports, entertainment and lifestyle, log on to our website latestly.com).