Cicadas Seen in US First Time in 17 Years! Know If They Are Dangerous And Everything About These Periodical Insects 'Wailing Like Aliens' 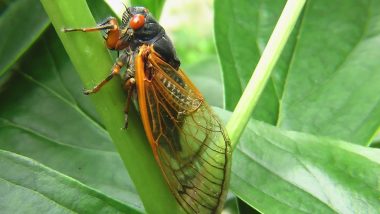 Cicada in US (Photo Credits: Pixabay)

What more does 2020 has in store, you ask? A question that probably no one wants an answer to right now, but there's another insect springing out! After reports of murder hornets, Periodical Cicadas, small insects with wide eyes and a noisy buzz are waking up from their hibernation. Almost 17 years later, over a million of these insects have started to emerge in parts of eastern US like North Carolina, Virginia, and West Virginia. But if you are already feeling anxious about another problem to deal with, then let us tell you they are harmless. There is nothing to fear of these cicadas but you will have to do with their irky noise. But a million of them popping up can cause a noisy issue. Let us know more about these insects. 'Murder Hornets' in US For The First Time; Know About The Largest Wasps That Kill Almost 50 Humans Per Year!

The cicadas belong to the scientific family Cicadoidea of bugs. There are over 3,000 species in this family around the world. In their appearance, these insects have wide eyes (some species have red eyes), short antennae, and membranous front wings. They have a loud noise, which again varies with every species. Some of them have a periodic habitat, meaning they spend most of their lives living underground and emerge out only after 13 to 17 years. There are also annual cicadas which emerge every year. The ones that are emerging in the US right now are Periodical Cicadas.

Belonging to the genus of Magicicada, these species spend almost the full length of their long lives underground feeding on xylem fluids from the roots of forest trees in the eastern United States. They emerge in their 13th or 17th year in springtime. The adults are active only for four to six weeks of activity before they die. Giant Lizard That 'Eats Anything It Wants' Seen in Georgia, Know More About This Argentina Tegu Species.

Are They Dangerous to Humans?

They are not harmful to humans, animals or even plants. These insects, however, produce a noise as their mating calls to attract the females. The noises that cicadas produce are mating calls from the males who are attempting to attract females. It could be annoying as it is described as an "alien-like wail," according to Virginia Tech.  Entomologists from their department Eric Day says, "Communities and farms with large numbers of cicadas emerging at once may have a substantial noise issue." But he added that more than the annoyance it is an amazing event because it is so rare.

Brood IX cicadas have emerged in North Carolina, Virginia, and West Virginia. So if residents around are hearing some loud noises, more like wails, then its just the cicadas trying to mate.

(The above story first appeared on LatestLY on May 28, 2020 02:51 PM IST. For more news and updates on politics, world, sports, entertainment and lifestyle, log on to our website latestly.com).