Ice in Arctic Ocean Melts to Its Second-Lowest Level in 40 Years, Here’s Why This Year’s Decline Was So Fast 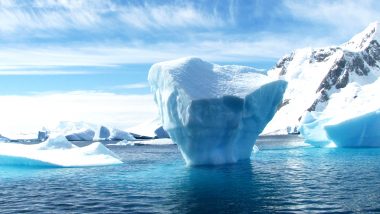 Ice acts like a protective cover over the Earth and our oceans. In recent decades, sea ice in the Arctic Ocean has been melting faster than almost all climate models predicted. According to the latest report by US scientists, ice in the Arctic Ocean melted its second-lowest level on record this summer, triggered by global warming along with natural forces. The extent of the ice-covered ocean at the North Pole and extending further south to Alaska, Canada, Greenland and Russia reached its summertime low of 1.4 million square miles in the past few days. Scientists report that warming in the Arctic melted the ice to second-lowest in 40 years, ever since satellite records began. But this year’s decline was significantly faster, and scientists explained in their research the reason behind the ice in the Arctic Ocean shrivelled to its second-lowest extent.

Arctic sea ice usually reaches its low point in September and it's high in March, after the winter season. Until this month, only once in the last 42 years has Earth’s frozen skull cap covered less than four million square kilometres. As per record, sea ice extent has diminished 14 percent per decade over that period. In fact, researchers reported in Nature Climate Change in August, 2020, that the Arctic could see its first ice-free summer as early as 2035. Canada’s Last Fully Intact Ice Shelf Breaks Off Due to Climate Change.

Why This Year’s Decline Was So Fast?

Arctic sea ice usually reaches its low point in September and it's high in March after the winter. But this year’s melt is second only to 2012, when the ice shrank to 3.4 million square kilometres, noted the National Snow and Ice Data Centre, which has been keeping the satellite records since 1979. As per researchers, this year’s decline was especially fast between August 31 and September 5, because of pulses of warm air from a heatwave in Siberia. The rate of ice loss during those six days was faster than during any other year on record. Temperatures in the Siberian Arctic were 8 to 10 degrees Celsius above normal for much of the year.

The loss of sea ice threatens the planet. This would be bad news for polar bears, which are already on a glide path towards extinction. Loss of ice also threatens the region’s marine ecosystems, from phytoplankton to whales.

“The numbers that we're getting in terms of extent of sea ice decrease each year put us pretty much on red alert in terms of the level of worry that we have, our concern for the stability of this environment,” Tom Foreman, a polar wildlife expert and Arctic guide said in a statement as quoted by media reports. The same warming that is opening summertime Arctic waters is also eating away at the ice sheets which are covering the Arctic lands in Canada and Greenland. Scientists warn that the faster those ice sheet shrinks into the surrounding ocean, the sooner sea levels will rise worldwide.

(The above story first appeared on LatestLY on Sep 22, 2020 02:24 PM IST. For more news and updates on politics, world, sports, entertainment and lifestyle, log on to our website latestly.com).