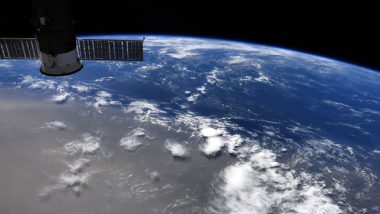 A massive Saharan dust cloud is headed towards North America this week. The plume of dust from the African Sahara desert is into the Caribbean Sea and expected to reach the Gulf of Mexico and parts of US this week. But if you are already panicking about the worse then let us tell you, it is not as dangerous. The thick plume is even visible from the International Space Station. NASA's astronaut Doug Hurley has posted a video from the space which shows how large area the dust covers. Massive Dust Storm Hits Central New South Wales in Australia, Photos And Videos Go Viral.

But these kind of dust storms are not uncommon. This dust called the Saharan Air Layer and is indeed helpful to keep the cyclones in control. Meteorologists say that this hot and dry moving air over the ocean is common at this time of the year. Also, these giant dust clouds also make for some pretty sunsets. Washington Post Meteorologist Matthew Cappucci says, "Hot air at the mid-levels can quash thunderstorm development, decreasing the likelihood that tropical storms or hurricanes form in the short term. That’s good news heading into July, though the current dust events will be long since over by the time hurricane season peaks in August and September." So that's a respite.

Check Pic of The Saharan Dust As Seen From ISS:

We flew over this Saharan dust plume today in the west central Atlantic. Amazing how large an area it covers! pic.twitter.com/JVGyo8LAXI

Here's a Video Representation of The Dust Clouds:

On June 16, 2020, @NOAA's #GOESEast 🛰️ captured this imagery of an expansive #DustPlume from the #Sahara Desert traveling west across the Atlantic. It's expected to reach the #Caribbean later this week, and may even reach parts of the U.S. next week.

According to NOAA (National Oceanic and Atmospheric Administration) these dust clouds have an impact on hurricane development but the amount of dust is different this time, it is more than usually seen during this time in June. The dust particles make the skies hazy which will result in wonderful sunrise and sunsets along the US Gulf Coast. But there's also a danger of rising toxic algal blooms in the region. It can cause an issue for those already suffering from respiratory issues.

(The above story first appeared on LatestLY on Jun 22, 2020 10:42 AM IST. For more news and updates on politics, world, sports, entertainment and lifestyle, log on to our website latestly.com).