A drone recently captured an enormous dust storm that swept through the Central West of New South Wales, Australia. The duststorm seemed to be the height of tall buildings. 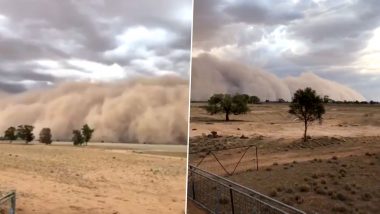 A drone recently captured an enormous dust storm that swept through the Central West of New South Wales, Australia. Photos and videos of the dust posted on social media platforms show huge clouds of dust swirling down on the city of Dubbo, around 8 pm on Sunday. The duststorm seemed to be the height of tall buildings. The massive dust cloud first hit the town of Narromine, 40 kms to the west, before coming down on Duboo and then in Parkes, 120 km to the south. The strong wind gusts in Dubbo ahead of the dust storm at 7:45 pm were upto 107km/h. Mysterious Orange Lights Flash Up in Ohio's Sky, People Wonder if It Were Aliens, Spooky Video Surfaces Online.

Moving across the landscapes, the winds produced by thunderstorms stirred dust storms making day look like night in small towns. According to NASA, winds could lift tiny particles of dust into the air due to the dry weather conditions. Patrick De Deckker, a professor at the Australian National University, said it was the biggest dust storm since 2009. Many residents who saw the incident captured it and posted videos on social media platforms. The videos show terribly big dust storm with the capability to swallow the whole town.

Nyngan‘s Grace Behsman took this video of a huge dust storm rolling in as they approached town. Watch til end - scary moment when the storm overtakes and everything goes black. The dust storm has swept the west & is encroaching Dubbo. Remember: not everyone’s celebrating rain 😔 pic.twitter.com/5VMLrFbrrT

Next time they forecast a storm, I'll know just to assume #duststorm. 3mm of rain since Wednesday and 2 of these since Friday. pic.twitter.com/XoHHcEVX2x

Following months of dry weather, the soil has become quite dry making it easier for winds to lift dust particles into the air. Australia has been witnessing an array of natural disasters in the recent past. Bushfires raged during forests destroying wildlife and animal life. It was followed by rains but it did not last long. The recent dust storm also reached Parkes, the site of the iconic radio telescope which beamed images of the first moon landing around the world.

(The above story first appeared on LatestLY on Jan 20, 2020 01:54 PM IST. For more news and updates on politics, world, sports, entertainment and lifestyle, log on to our website latestly.com).