What Is a Solar Storm? How It Occurs and Affects on GPS & Mobile Signals; All You Need To Know About the Geomagnetic Storm That May Hit Earth Today

The massive solar storm has been caused due to a hole that opened up in the Sun's atmosphere. It is spewing a stream of solar wind in Earth's direction, prompting weather agencies to issue warnings. Reports inform that the satellite signals can also be interrupted due to this collision. 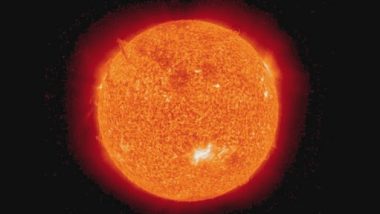 New Delhi, July 12: A very powerful and fierce solar storm is heading towards the Earth at a speed of 1.6 million kilometers per hour. The geomagnetic storm may hit the Earth's magnetic field today which may lead to a massive power failure around the world or can affect GPS and Mobile Signals. It has the potential to a major impact on the communication infrastructure across the globe as it moves with massive intensity. According to a report by Spaceweather.com, the solar storm, as the name suggests, originated from the Sun's atmosphere.

This solar storm could spark high-altitude auroras, the celestial lighting, that can be witnessed by people living at northerly or southerly latitudes during the night. The massive solar storm has been caused due to a hole that opened up in the Sun's atmosphere. It is spewing a stream of solar wind in Earth's direction, prompting weather agencies to issue warnings. Reports inform that the satellite signals can also be interrupted due to this collision.

Geomagnetic Unrest to Hit Earth All About The Solar Storm That Could Disrupt GPS, Phone Services:

"Flowing from an equatorial hole in the sun's atmosphere, wind speeds could top 500 km/s. Full-fledged geomagnetic storms are unlikely, but lesser geomagnetic unrest could spark high latitude auroras", a report by spaceweather.com said. Solar Winds Could trigger a Geomagnetic Storm Above Planet.

What is a Solar Storm?

A Solar Storm is also known as a geomagnetic storm. It is a disturbance on the Sun which can emanate outward across the heliosphere and can affect the entire Solar System, including the Earth and its magnetosphere. A solar storm can cause a temporary disturbance of the Earth's magnetosphere due to a solar wind shock wave and/or cloud of the magnetic field that interacts with the Earth's magnetic field. Solar System(s) of the Galaxy! Scientists Spot Distant Star System Hosting Planets Revolving in Strange ‘Rhythm’ Around the Orbits.

Solar storm refers to disturbances taking place in Earth's magnetosphere due to the efficient exchange of energy from solar winds entering Earth's space environment. A solar storm has three phases-initial, main, and recovery. The disturbance that drives the magnetic storm may be a solar coronal mass ejection (CME) originating from a coronal hole, the areas where the Sun's corona is colder, hence darker, and has lower-density plasma than average because there are lower energy and gas levels.

The frequency of geomagnetic storms increases and decreases with the sunspot cycle. Reports inform that a geomagnetic storm can damage satellites, power grids, and radio communications, and could cause electrical blackouts on a massive scale that might not be repaired for weeks, months, or even years.

What is a Solar Flare?

A Solar flare is a large explosion in the Sun's atmosphere. It is caused by tangling or reorganizing of magnetic field lines near sunspots. The solar activity associated with the 'Space Weather' is divided into 4 main components which include solar flares, coronal mass ejections, high-speed solar wind, and solar energetic particles. Solar flares impact Earth only when they occur on the side of the sun facing Earth.

During solar storm the wind which flows toward Earth, carries with it the Sun's magnetic field. This could even break the Earth's Magnetic field, which can affect GPS navigation, mobile phone signal, satellite TV and power grids.

The first scientific observation of the effects of a geomagnetic storm occurred early in the 19th century: from May 1806 until June 1807. Alexander von Humboldt recorded the bearing of a magnetic compass in Berlin. On  December 21, 1806, Humboldt noticed that his compass had become erratic during a bright auroral event.

Solar storms have been known to cause destruction in parts of the world. A solar storm in March 1989 caused a nine-hour blackout of Hydro-Québec's electricity transmission system in Canada. Reports inform that nearly six million people were left without power for nine hours. The storm caused auroras as far south as Texas. The storm causing this event was the result of a coronal mass ejected from the Sun on March 9, 1989.

On July 14, 2000, a X5 class solar flare erupted and a coronal mass was launched directly at the Earth. It was known as the Bastille Day event, which was observed by Voyager 1 and Voyager 2,  thus it is the farthest out in the Solar System that a solar storm has been observed.

(The above story first appeared on LatestLY on Jul 12, 2021 09:11 PM IST. For more news and updates on politics, world, sports, entertainment and lifestyle, log on to our website latestly.com).