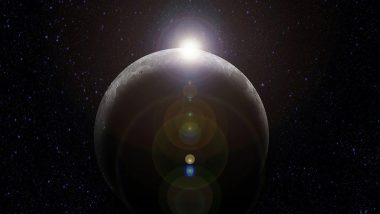 Our solar system is not the only one! Over the years, astronomers have discovered thousands of other stars with planets orbiting them in our galaxy. The Sun is just one of about 200 billion stars which give scientists plenty of places to hunt for planets outside our solar system. While doing that, astronomers have found a ‘very special’ solar system with six planets that are locked in a strange ‘rhythmic’ dance as they move around their orbits. The scientists noted that in contrast to the unusual rhythmic order of the planets as they move around the Sun, the planets in the star system are very much out of the expected order.

The solar system is located around a star called TOI-178, which is 200 lightyears away and could help explain to researchers how stars in our solar system are born and how they evolve. Aside from being fixed in an unusual rhythmic order, planets in this solar system are also off the expected course. The system's orbital motion is in harmony, but the physical properties of all planets vary from planet to planet. All the planets have different densities. ‘Alien’ Asteroids Hiding in Plain Sight in Our Solar System For Billions of Years Found by Astronomers!

“It appears there is a planet as dense as the Earth right next to a very fluffy planet with half the density of Neptune, followed by a planet with the density of Neptune,” Nathan Hara from the Université de Genève, Switzerland, who was involved in the study was quoted saying in Independent. The researchers described its findings and published it in Astronomy and Astrophysics.

There are six planets in the system. The scientists explain that in the time the first chain completes 18 orbits, the second has done nine and so on. The researchers were initially able to observe two planets. It was only later they realised that it was much more complex than that. “Through further observations we realised that there were not two planets orbiting the star at roughly the same distance from it, but rather multiple planets in a very special configuration,” Adrien Leleu from the Université de Genève and the University of Bern, who led the study was quoted in the same report. Life on Venus Possible? Scientists Discover Traces of Phosphine Gas Coming Out of Aerial Microbes in Venusian Atmosphere.

The solar system gives a sneak peek into the life of planets different from the planets in our solar system. The astronomers further added that this system's orbits are very well ordered, which explains that this solar system has evolved gently since its birth. But that exists in strange contrast with the unusual lack of order in the planets revolving around the star.

(The above story first appeared on LatestLY on Jan 26, 2021 05:08 PM IST. For more news and updates on politics, world, sports, entertainment and lifestyle, log on to our website latestly.com).