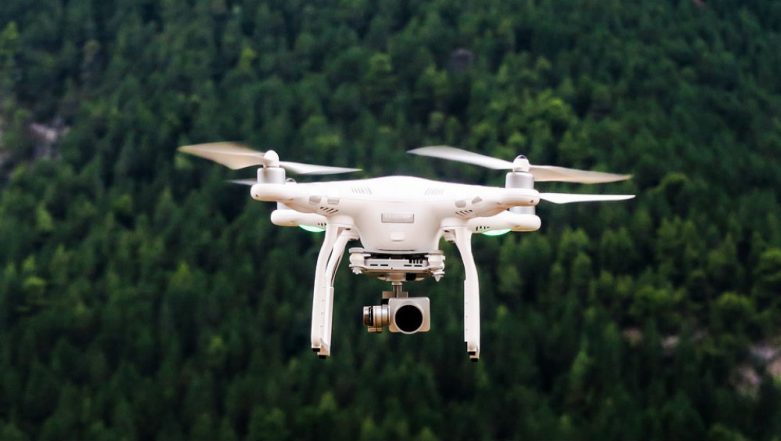 In a statement on Wednesday, Zomato said the test was conducted using a hybrid drone that was able to cover a distance of 5 kms in about 10 minutes with a peak speed of 80 kmph while carrying a payload of 5 kgs. The test was conducted at a designated zone as per DGCA norms, it added. Zomato In Trouble Again? Man Alleges Plastic in Food, Hotel Owner Says 'Delivery App Rider Must Have Changed it'; See Pics.

"The only possible way to reduce the average 30.5 minutes to 15 minutes is to take the aerial route - roads are not efficient for very fast delivery. We have been working towards building sustainable and safe delivery technology and with our first successful test, food delivery by drones is no longer just a pipe dream," Zomato founder and CEO Deepinder Goyal said.

He added that while there are regulatory hurdles, the tech is ready for use. The drone has inbuilt sensors and an onboard computer to sense and avoid static and dynamic objects. It is also capable of taking off vertically like a helicopter, transiting to an airplane mode to cover the distance and then switching back to helicopter mode for vertical landing without requiring any airstrip.

As per a notification of Directorate General of Civil Aviation (DGCA), organisations were asked to submit an Expression of Interest (EOI) for conducting experimental Beyond Visual Line of Sight operations (BVLOS) of Remotely Piloted Aircraft Systems (RPAS)/Unmanned Aircraft Systems (UAS).

In response to the notification, Zomato is forming a consortium as per DGCA's guidelines to carry out experimental BVLOS operations, the statement added.