Central Bank of Mexico Announces To Operate Digital Currency in 2025

Victoria Rodriguez Ceja, Governor of the Central Bank of Mexico (Banxico), announced that the country will begin to operate a digital currency in 2025. 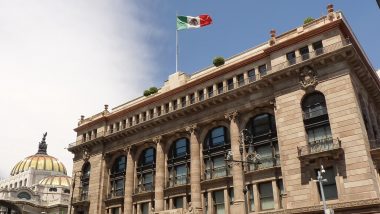 Mexico City, April 22: Victoria Rodriguez Ceja, Governor of the Central Bank of Mexico (Banxico), announced that the country will begin to operate a digital currency in 2025.

The digital currency will seek to generate means of payment aimed at financial inclusion; expand options for fast, secure, efficient and interoperable payments; and implement competitive features to payment methods, Xinhua news agency quoted the Governor as saying before a Senate Finance Committee.

"We estimate that the final operation process will take about three years and will be aimed at banked and unbanked people, expanding payment possibilities," she explained. Mexico Shooting: 9 People, Including Three Women, Shot Dead at Private Residence in Atlixco.

Ceja also said that the digital currency will comply with three basic characteristics: a means of payment, a unit of account and a store of value, and will coexist with physical bills and coins circulating across the country.

Banxico had earlier announced plans for a digital currency two years ago.

(The above story first appeared on LatestLY on Apr 22, 2022 02:48 PM IST. For more news and updates on politics, world, sports, entertainment and lifestyle, log on to our website latestly.com).