According to the letter, the governor has donated 200,000 ordinary face masks, 2,000 N-95 face masks, five ventilators, 2,000 testing kits and 2,000 medical protective clothes mainly used by doctors and paramedics to fight with virus, which originated in China late last year. 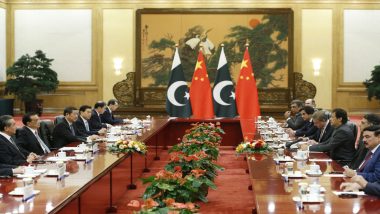 Islamabad, March 26: China has asked Pakistan to open the border between the two countries for one day on Friday so that medical supplies to fight coronavirus pandemic could be transported into the country, according to a media report. The Khunjerab Pass is usually opened on April 1 which marks the end of winter in that part, but due to the global outbreak of COVID-19, the border between Pakistan and China has been closed for an indefinite period.

The Chinese embassy in a letter to the Ministry of Foreign Affairs said that the governor of Xinjiang Uyghur Autonomous Region of China would like to donate a batch of medical materials to Gilgit-Baltistan, the Dawn reported. According to the letter, the governor has donated 200,000 ordinary face masks, 2,000 N-95 face masks, five ventilators, 2,000 testing kits and 2,000 medical protective clothes mainly used by doctors and paramedics to fight with virus, which originated in China late last year. Pakistan: Chinese Man Suspected to Be Infected With Coronavirus Hospitalised in Multan.

The donation is in response to a request made by GB Chief Minister Hafeezur Rehman to the governor of Xinjiang region to combat coronavirus in the province. Gilgit-Baltistan has high percentage of coronavirus cases in the country compared to its population, but the underdeveloped region has a negligible number of operational ventilators and remoteness has led to a severe shortage of medical equipment.

The province has reported 84 positive cases so far while the national tally has reached to 1,102 and the death toll to eight. Earlier, National Disaster Management Authority (NDMA) Chairman Lt Gen Mohammad Afzal had said said Pakistan had sought to purchase medical equipment, including ventilators, but these were in short supply around the world and only China had assured that it would provide such items to Pakistan.

Under a border protocol agreement of 1985, the Khunjerab border crossing remains closed from the end of November to April. Trade and travel activities between the two countries take place through Khunjerab Pass, also known as Sust Dry Port – the only land route between China and Pakistan.