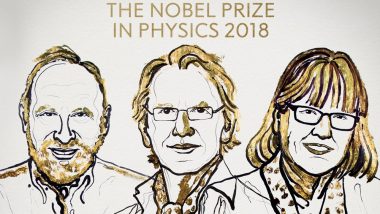 Other than the Jean-Claude Arnault controversy this year, Nobel Prize was also facing questions on why so few women entered the pantheon, particularly sciences. However, putting this debate to rest, the Royal Swedish Academy of Sciences has decided to award the Nobel Prize in Physics 2018 “for groundbreaking inventions in the field of laser physics” with one half to Arthur Ashkin and the other half jointly to Gérard Mourou and Donna Strickland. This is the first time in 55 years that a woman has won the Nobel Prize in physics, bringing the total number of female recipients of the prize to three. Know About Arthur Ashkin, Gerard Mourou and Donna Strickland, Winners of Nobel for Inventions in Laser Physics.

Reportedly, ever since the first prizes were awarded in 1901, 892 individuals have received one, but just 48 of them have been women. Thirty of those women won either the literature or peace prize, highlighting the wide gender gap in the laureates for physics, chemistry and physiology/medicine. Critics have highlighted that gender bias pervades the process of nominations and this is one of the major reason for the disparity. Nobel Prize 2018 For Physics Winner: Arthur Ashkin, Gerard Mourou & Donna Strickland Awarded Honour For Laser Inventions.

(The above story first appeared on LatestLY on Oct 02, 2018 04:16 PM IST. For more news and updates on politics, world, sports, entertainment and lifestyle, log on to our website latestly.com).