Greta shared a Google Doc toolkit on Twitter for the farmer protests in India, which she later deleted. According to reports, the toolkit included a document on details of January 26 protests and online and street protests by farmers. 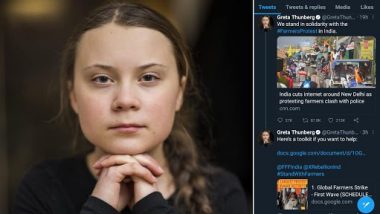 New Delhi, February 3: Swedish youth activist Greta Thunberg on Wednesday shared a Google document toolkit on social media for the farmer protests in India and deleted the post soon after. Thunberg deleted the tweet that had put a 'toolkit' in Google document which stated that, 'Here's a toolkit if you want to help". However, later in the day she tweeted an updated version of the toolkit.

As soon as Greta shared a toolkit on social media for the farmer protests in India, Twitter erupted with mixed reactions and backslash. According to  reports, the toolkit included a document on details of January 26 protests, schedule of online and street protests, details about the internet ban and background of the farmers' protest. Meena Harris, Rihanna, Greta Thunberg, Jim Costa Among Other International Personalities Speak Out Against 'Oppression' of Protesting Farmers.

According to a report by IANS, the toolkit document details how and where the protests should be done outside Indian missions abroad, media houses, government buildings and even Adani-Ambani offices. On Wednesday, the Ministry of External Affairs (MEA) issued a statement, saying that it is unfortunate to see vested interest groups trying to enforce their agenda on these protests, and derail them. The statement came after comments made by Rihanna and Thunberg on the ongoing farmers' protest in India.

Greta Thunberg deletes the tweet that had put a "toolkit" of google docs.

We stand in solidarity with the #FarmersProtest in India.

The MEA further said that some of the vested interest groups have also tried to mobilise international support against India. "Yet, it is unfortunate to see vested interest groups trying to enforce their agenda on these protests, and derail them. This was egregiously witnessed on January 26, India's Republic Day. A cherished national commemoration, the anniversary of the inauguration of the Constitution of India, was besmirched, and violence and vandalism took place in the Indian capital", the MEA said.

"Instigated by such fringe elements, Mahatma Gandhi statues have been desecrated in parts of the world. This is extremely disturbing for India and for civilised society everywhere," the MEA added.

(The above story first appeared on LatestLY on Feb 04, 2021 04:45 PM IST. For more news and updates on politics, world, sports, entertainment and lifestyle, log on to our website latestly.com).