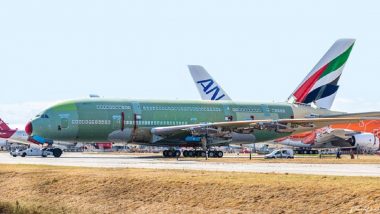 Paris, September 25: The assembly of the last ever jumbo jet Airbus A380 was completed in Toulouse in France on September 23. The Airbus A380 with serial number MSN 272 rolled out from the final assembly line. A special event was held for employees to commemorate the milestone. Airbus CEO Guillaume Faury also attended the event.

The aircraft will now complete its final checks, including on-board computers, landing gear and fuel gauge calibration. Engines in this aircraft will also be fitted in a few days. After engine tests are performed, the aircraft will make its first test flight to Hamburg, Germany, reported CNN  Travel. In Germany, the cabin will be installed, fitted out, and the plane painted in the customer's livery.

Images of Last Ever Airbus A380:

The last one ! 😭Initial assembly of msn 272, the last #Airbus #A380 is completed, it was transferred from station 40 to station 35 this morning. 🇦🇪 #AvGeek #Toulouse pic.twitter.com/wvKDqKyLil

The particular aircraft will be part of Emirates Airlines. Seven other A380 will also be delivered to Emirates. Meanwhile, one plane going to All Nippon Airways. The production of the jumbo jet will end after all the buyers receive their last orders. According to the CNN Travel report, around 1,500 countries are involved in manufacturing all the individual parts of A380 aircraft. The Airbus A380 was developed at the cost of $25 billion. It has a capacity of up to 853 passengers.

(The above story first appeared on LatestLY on Sep 25, 2020 09:29 PM IST. For more news and updates on politics, world, sports, entertainment and lifestyle, log on to our website latestly.com).