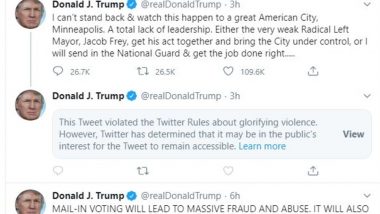 San Francisco, May 29: Twitter on Friday sounded an all-out war against US President Donald Trump by flagging a fresh tweet from him that violated Twitter policies about glorifying violence.

Twitter placed a public interest notice on the latest Tweet from Trump that read: "....These THUGS are dishonoring the memory of George Floyd, and I won't let that happen. Just spoke to Governor Tim Walz and told him that the Military is with him all the way. Any difficulty and we will assume control but, when the looting starts, the shooting starts. Thank you!"

The micro-blogging platform said this Tweet violates its policies regarding the glorification of violence "based on the historical context of the last line, its connection to violence, and the risk it could inspire similar actions today". Minnesota Police Precinct Goes Up in Flames As Protesters Turn Into Riots Over Killing of George Floyd.

"We've taken action in the interest of preventing others from being inspired to commit violent acts, but have kept the Tweet on Twitter because it is important that the public still be able to see the Tweet given its relevance to ongoing matters of public importance," explained Twitter.

Trump's offensive came on the back of fact checks by Twitter which took the form of a hyperlink that tagged onto exactly two of Trump's tweets and said "Get the facts about mail-in ballots".

(The above story first appeared on LatestLY on May 29, 2020 01:27 PM IST. For more news and updates on politics, world, sports, entertainment and lifestyle, log on to our website latestly.com).