Myanmar Jade Mine Landslide: Over 100 People Dead in Hpakant, Several Workers Trapped Inside 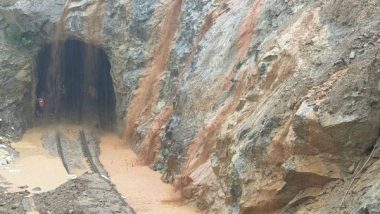 Naypyitaw (Myanmar), July 2: More than 100 people died and several went missing on Thursday in northern Myanmar after a landslide at a jade mine, says BBC. The country's fire service department said that some of the workers are still trapped inside the jade mine in the Hpakant area of Kachin state and the rescue work has been initiated.

According to the information ministry official, the miner were collecting stones in the jade-rich Hpakant area of Kachin state. Suddenly a 'muddy wave', caused by heavy rain, buried them. BBC have said that, at least 113 bodies have been found till now and rescue operation is still underway.  Informing more, the country's fire service department had said in a Facebook post, "Now in total 50 dead bodies. We are still working on the rescue process." Nepal: Landslide Sweeps Houses in Parbat District, Five Dead, Three Missing.

Rescue officer claimed, as quoted by www.xinhuanet.com, that a 304-meter high cliff collapsed, which buried the local jade scavengers. It is to be known that deadly landslides are frequent in Kachin state where the Jade Mine is situated. Earlier in November 2015, 116 jade miners died in a major fatal landslide that occurred in the region.

(The above story first appeared on LatestLY on Jul 02, 2020 11:43 AM IST. For more news and updates on politics, world, sports, entertainment and lifestyle, log on to our website latestly.com).