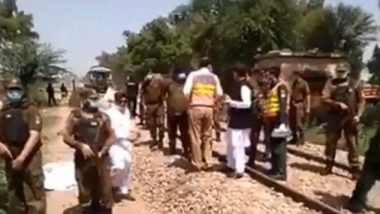 Islamabad, July 3: In a tragic incident, at least 19 people were killed after a bus carrying Sikh pilgrims was hit by a train in Pakistan. According to a tweet by ANI, local media reports inform that the bus was hit by a train in Sheikhupura district in Pakistan's Punjab. While 19 passengers died, eight others have been injured and have been rushed to a nearby hospital.

According to a report by Times Now, accident took place near Farooqabad railway station. The train was headed to Lahore from Karachi when the bus rammed into it. Reports inform that the Sikh pilgrims were returning to Gurdwara Sacha Sauda after performing religious rituals at Nankana Saheb.

Several reports claim that the express train which rammed into a bus was the Karachi-Lahore Shah Hussain Express. Evacuee Trust Property Board (ETPB) spokesperson Amir Hashmi was quoted by news agency PTI saying that at least 29 people, most of them Pakistani Sikhs, were killed in the collision.

(The above story first appeared on LatestLY on Jul 03, 2020 04:21 PM IST. For more news and updates on politics, world, sports, entertainment and lifestyle, log on to our website latestly.com).