Meanwhile, in Beijing, the Pakistan Embassy hosted an event on floods in Pakistan. "Delighted to host representatives of multilateral organisations, Chinese think tanks and academia at the embassy. 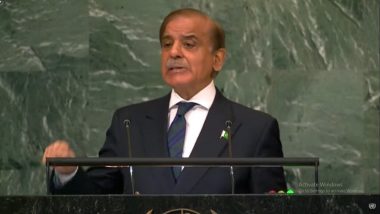 Islamabad, October 2: Pakistan Prime Minister Shehbaz Sharif is expected to embark on an official visit to China in the first week of November, media reports said. "Last minute details are being worked upon, but the visit is very much on," sources told The News.

Meanwhile, in Beijing, the Pakistan Embassy hosted an event on floods in Pakistan. "Delighted to host representatives of multilateral organisations, Chinese think tanks and academia at the embassy. Briefed them on recent floods in Pakistan and Pakistan's vulnerability to climate change. Touched by their desire to contribute," said Pakistan's Ambassador Moinul Haque. Pakistan Government Twitter Account Withheld in India.

Interestingly, Haque was also at one time being considered as the future Foreign Secretary but his tenure in office expires next year. According to a statement, international organisations, Chinese think tanks, NGOs, Global Young Leaders Dialogue (GYLD) members and members of the Pakistani community attended the event in Beijing.

On the occasion, Moin briefed the audience about the extent and nature of the recent unprecedented floods in Pakistan. Expressing gratitude for the support extended by the international community, particularly China and the UN, he reiterated the need for proactive climate action and international solidarity to mitigate the effects of climate change. SCO Summit 2022: Pakistan PM Shehbaz Sharif Struggles To Put On Headphones During Bilateral Meeting With Russian President Vladimir Putin (Watch Video).

He stressed that it was unfortunate that despite being a low carbon emitter, Pakistan was among the countries most vulnerable to climate change. He called on rich countries to help the developing states affected by climate change. He hoped that the international community would remain engaged with Pakistan in the rehabilitation and reconstruction phase.

(The above story first appeared on LatestLY on Oct 02, 2022 11:50 PM IST. For more news and updates on politics, world, sports, entertainment and lifestyle, log on to our website latestly.com).