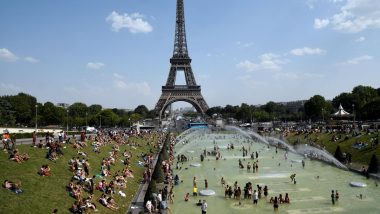 Paris, September 30: A large explosion was heard all over Paris on Wednesday. According to reports, the explosion was caused by a fighter jet breaking the sound barrier. Panic gripped the area due to the loud sound of the explosion. As per eyewitnesses, buildings shook due to the explosion. People also rushed out of their houses. Bengaluru Loud Sound: Was it Sonic Boom? Here's What The Term Means.

However, no smoke and fire was reported in the French capital. Play at the Roland Garros tennis tournament was also briefly stopped due to the incident. More details are still awaited. Paris Stabbing: 4 People Injured in Knife Attack Near Former Charlie Hebdo Offices.

Explosion Heard During The Tennis Match:

Explosion in Paris heard from games at Rolland Garros pic.twitter.com/3eVhSLrXQQ

The city has already been on a high alert after the recent stabbing incident near the former offices of satirical newspaper Charlie Hebdo. Four people were reportedly injured in the attack

(The above story first appeared on LatestLY on Sep 30, 2020 03:58 PM IST. For more news and updates on politics, world, sports, entertainment and lifestyle, log on to our website latestly.com).