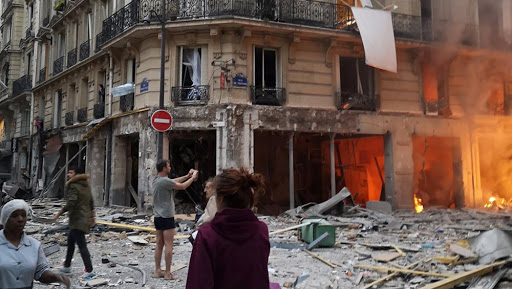 An image of Paris explosion on Saturday. | Image Courtesy: Twitter

Paris, January 12: In a shocking incident, a massive explosion struck the Central Paris on Saturday Morning, leading to injuries to several people. Initial reports from the police state that the blast took place at a bakery shop - Rue de Trevise – situated on the ninth arrondissement of the French capital. Local media reports that at least 20 people were injured in the blast, with two in a critical condition and seven seriously wounded.

Taking stern action, police team reached the spot and have cordoned the area. Also, Emergency vehicles too are reaching the spot and people are being evacuated by the emergency response team. Police have requested the people, residing nearby, to ‘avoid the area and allow the passage of the emergency vehicles’. Delhi: 6 Killed as Explosion in Moti Nagar Factory Leads to Partial Building Collapse.

According to the eye witnesses, the blast was so powerful that it smashed windows of the building. Though the reason for the blast is yet to be ascertained, the images of the showed debris strewn across the boulevard and flames coming from the base of the building.