"We are unhappy with the way Narendra Modi has turned India into a ‘republic of fear’," said Kalpana Wilson, one of the Indian-origin protesters. 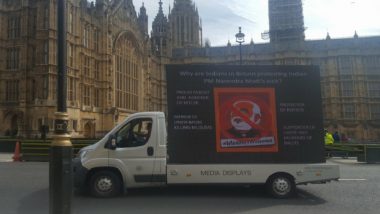 "We are unhappy with the way Narendra Modi has turned India into a ‘republic of fear’," said Kalpana Wilson, one of the Indian-origin protesters. (Photo Credits: Twitter/SouthAsia Solidarity)

London, April 18: The rage which erupted across India over the attempt by a section of ruling party elements to defend the accused rapists in Unnao and Kathua, resonated in the United Kingdom where Prime Minister Narendra Modi is on a state visit.

Angry protesters among the Indian diaspora rallied in London raising placards against PM Modi and his ruling Bharatiya Janata Party. With chants of "Modi go home", the protesters alleged the Indian government is backing a section of anti-social elements who are "targeting the Dalits, minorities and women".

The demonstrations were staged at 10 Downing Street, where PM Modi held talks with his UK counterpart Theresa May.

The protest came in the backdrop of the Opposition in India accusing the BJP of "attempting to shield" the accused in the Kathua and Unnao rape cases.

While an eight-year-old Muslim girl was gang-raped and murdered in Kathua, a 17-year-old was allegedly raped by a BJP MLA and his accomplices in Unnao.

"The Indian government are doing nothing, and you feel sorry for the families because of the total injustice of it all," said an Indian-origin protester Navindra Singh, while speaking to the Reuters.

Among the protesters also included members of UK-based Ambedkarite and Ravidassia organisations who have opposed the government's "lackadaisical response" towards challenging the Supreme Court order which allegedly diluted the provisions of SC/ST (Atrocities) Act.

Members of the South Asia Solidarity Group also joined the protests demanding justice to the victims of "mob-lynching and other hate-crimes" in India. "We are unhappy with the way Narendra Modi has turned India into a ‘republic of fear’," said the group's member Kalpana Wilson.

(The above story first appeared on LatestLY on Apr 18, 2018 08:19 PM IST. For more news and updates on politics, world, sports, entertainment and lifestyle, log on to our website latestly.com).