Lavrov was referring to America's attempts to impose its own so-called "rules-based international order", which have met with strong resistance from Moscow and Beijing. 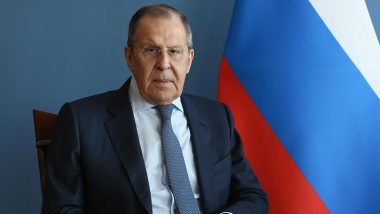 Moscow, April 11: Russia's military action in Ukraine is meant to put an end to the US-dominated world order, as per Russian Foreign Minister Sergey Lavrov.

Washington has been seeking supremacy by imposing ad hoc rules and violating international law, he claimed, in an interview aired by Russian television on Monday, RT reported. Shehbaz Sharif Says Will Step Down If 'Foreign Conspiracy' to Oust Imran Khan Proved.

He was referring to America's attempts to impose its own so-called "rules-based international order", which have met with strong resistance from Moscow and Beijing.

"Our special military operation is meant to put an end to the unabashed expansion (of NATO) and the unabashed drive towards full domination by the US and its Western subjects on the world stage," Lavrov told Rossiya 24 news channel.

"This domination is built on gross violations of international law and under some rules, which they are now hyping so much and which they make up on a case-by-case basis," he added.

Russia is among the nations who would not submit to Washington's will, the Russian leader said. It will only be part of an international community of equals and will not allow Western nations to ignore its legitimate security concerns, Lavrov said, RT reported.

(The above story first appeared on LatestLY on Apr 11, 2022 08:33 PM IST. For more news and updates on politics, world, sports, entertainment and lifestyle, log on to our website latestly.com).