Pakistan Muslim League-Nawaz (PML-N) President Shehbaz Sharif on Sunday submitted his nomination papers for the Prime Minister's post after the seat fell vacant following Imran Khan's ouster from power through a vote of a no-confidence motion. 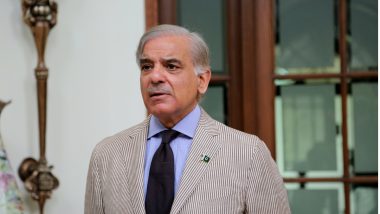 In accordance with the deadline of the submission stipulated by the National Assembly (NA), Sharif submitted nomination papers for the new leader of the house, while the Pakistan Tehreek-e-Insaaf (PTI) nominated former Foreign Minister Shah Mehmood Qureshi for the post, The Express Tribune reported.

The NA Secretariat had earlier announced the time for the submission of nomination papers and scrutiny for the election of premier and leader of the NA.  Pakistan PM Imran Khan Calls Emergency Session of Cabinet Amid No-Confidence Vote

According to the spokesperson, the submission and scrutiny of nomination papers for the election of the premier and leader of the NA shall be in accordance with the times announced in the House.

(The above story first appeared on LatestLY on Apr 10, 2022 04:05 PM IST. For more news and updates on politics, world, sports, entertainment and lifestyle, log on to our website latestly.com).