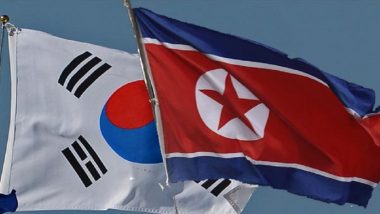 Seoul, September 24: A South Korean fisheries official who went missing on Monday may have been shot dead by North Korean troops and later cremated after attempting to defect to the North, according to Yonhap news agency.

According to a report on Channel News Asia, the official was reported to be missing from a South Korean fisheries patrol boat when it was about 10km south of the Northern Limit Line, which is a disputed line of military control. North Korea Blows Up Inter-Korean Joint Liaison Office in Kaesong.

Even though the exact reason the 47-year-old official was shot is still unknown, but reportedly North Korean troops may have been acting under anti-coronavirus orders.

In July, a North Korean defector who had fled to the South three years ago sneaked back over the heavily fortified border into the impoverished nation. This prompted North Korea to put the border city of Kaesong under lockdown amid fears that he may have carried the coronavirus.

(The above story first appeared on LatestLY on Sep 24, 2020 08:36 AM IST. For more news and updates on politics, world, sports, entertainment and lifestyle, log on to our website latestly.com).