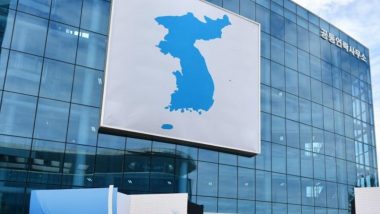 North Korea, June 16: North Korea blew up the inter-Korean joint liaison office in its border town of Kaesong, sharply escalating tensions on the Korean Peninsula on Tuesday. This comes after near-daily threats to punish Seoul over anti-Pyongyang propaganda leaflets, according to South Korea's Yonhap News Agency.

Tensions between the two sides have been escalating for weeks, prompted by defector groups in the South sending propaganda material across the border. Over the weekend, North Korean leader's sister, Kim Yo Jong, threatened to demolish the office in a "tragic scene" in a statement. North Korea to Take 'Military Action' Against South, Says Kim Jong Un's Sister Kim Yo Jong as Row Escalates Over Anti-Pyongyang Leaflets.

Yonhap agency reported that smoke was seen near the joint industrial complex where the North-South liaison office is located, which leader Kim Jong Un’s sister had over the weekend said that they would soon be seen “completely collapsed.” Kim had then on elaborated on what military action would be but had openly threatened the destruction of the Joint Liaison Office.

(The above story first appeared on LatestLY on Jun 16, 2020 01:07 PM IST. For more news and updates on politics, world, sports, entertainment and lifestyle, log on to our website latestly.com).