The betting market has undergone an upward progression in Spain since 2014. The latest Directorate General for Gambling Regulation (DGOJ) data suggests that online gambling grew between 2012a-2017 by 387 per cent, going from 2.8 billion euros ($3 billion) to over 13 billion euros. 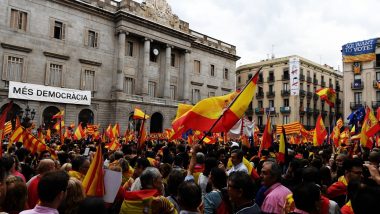 Madrid, October 7: Thousands of people demonstrated on Sunday in cities across Spain to denounce the rapid increase of gambling and number of betting shops and urged "decent" leisure activities as alternatives. Sports personalities and celebrities sell their images to publicize gambling, a sector that moves enormous sums and whose growing presence on streets and online has sparked alarm among those who see gambling as the next big addiction, the Efe news reported.

The betting market has undergone an upward progression in Spain since 2014. The latest Directorate General for Gambling Regulation (DGOJ) data suggests that online gambling grew between 2012a-2017 by 387 per cent, going from 2.8 billion euros ($3 billion) to over 13 billion euros. Hong Kong Protesters Pave Way for Fire Tenders In a Viral Video; Impressed Twitter Asks Beijing: ‘How Are They Rioters?

The most populous demonstration was held in the capital Madrid - in central areas where betting shops have proliferated recently, some of them close to schools. According to a spokesperson for the platform that organized the march, Adrián Belaire, the main goal of the protest was to set off a "constant, daily and committed struggle" to achieve "the end of the betting shops, which are destroying our neighbourhoods."

Protesters are advocating for the "total elimination" of this type of business. "We're not after any kind of regulation. 20 bookmakers are a problem, but one alone is too," he said. "These places cannot exist in the city or in the neighbourhoods because they're always going to be next to leisure centres, primary schools, high schools, libraries or parks," said Belaire, who said the situation in Madrid was a reflection of a problem that exists throughout the country.

According to the experts from the Official College of Psychologists of Madrid, the age limit for getting into "private" gambling - betting shops and other centres with immediate prizes - has gone down and "more and more families are asking for help because their children have addiction problems." The average annual expenditure by players of online betting in 2017 was 384 euros ($421), according to the DGOJ. The male average was 429 and the female 134 euros.

The Spanish government has control over online gambling (betting, casino games, gambling machines, poker and bingo), and regulates games that apply to the entire territory, like lotteries. Spain's autonomous communities are responsible for gambling in their respective territories. Authorities in Madrid were the latest to take action on the matter by banning public media from being able to advertise bets and also proposed that betting shops cannot be located within 100 meters schools, among other measures.

(The above story first appeared on LatestLY on Oct 07, 2019 09:20 AM IST. For more news and updates on politics, world, sports, entertainment and lifestyle, log on to our website latestly.com).