Hong Kong Protesters Pave Way for Fire Tenders In a Viral Video; Impressed Twitter Asks Beijing: ‘How Are They Rioters? 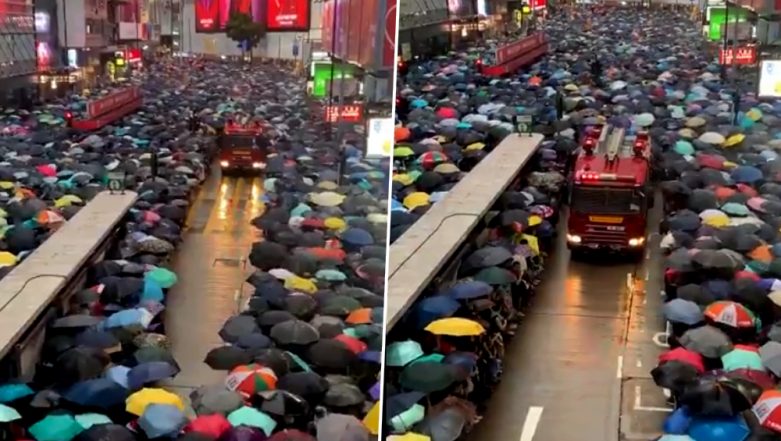 A viral video from Hong Kong of the protesters making way for a fire truck is doing rounds on the internet. The video shows, over hundreds of protesters holding colourful umbrella suddenly making way for a fire truck to reach its destination. The video was shared by Joshua Wong who is an activist from Hong Kong and also Secretary-General of Demosistō on Twitter with a caption that read: "I love Hong Kong. We deserve democracy and freedom. How can Beijing blame us as Rioters?" For people who have not followed the 'Rioters' situation streets in Hong Kong is filled with thousands of protesters since June 9 against the Fugitive Offenders Ordinance Amendment Bill. The bill is being tabled for passage by the government which will allow criminals to be extradited to mainland China for trials. The law, if passed, would allow China to seek extradition of political dissidents and subject them to torture, critics allege. Here is Hong Kong Protests Explained: Why The Agitation Was Launched And How China Has Responded So Far.

Amidst all this, Joshua chose to share this video and put out a question that asks how Beijing "blamed Hong Kong as Rioters." The video was intended to show how loving, peaceful and thoughtful people from Hong Kong were.

Take a Look at The Viral Video:

I love Hong Kong. We deserve democracy and freedom. How can Beijing blame us as Rioters? pic.twitter.com/V1vz6lRvJz

The reactions, however, are mixed some trolling Joshua and some who stand in support with him. Check out some of the reactions:

One In Support Of Joshua

That's the sad reality. If you fight for your rights you are called a anarchist /rioters etc. If you give in and accept oppressive rules to benefit the agenda of government then you are an law abiding person.

Protest beyond the law is not a departure from democracy; it is absolutely essential to it. pic.twitter.com/pmIdWRB2Ok

While the reactions are mixed, there have been no further comments from Joshua himself. In the 'rioters' case, the Communist Party of China (CPC) initially did not reply to the protests calling it a "domestic issue" of Hong Kong. However, it later expressing solidarity with Carrie Lam.