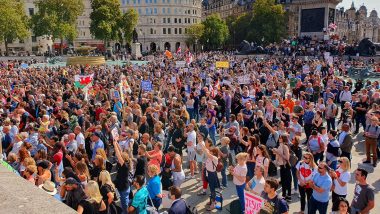 London, September 26: Raising slogans of "we do not consent", over 15,000 protesters gathered at Trafalgar Square in central London to protest against the fresh COVID-19 restrictions announced by the Boris Johnson government. Most of the rally participants were dubbed as "conspiracy theorists" by the local media. China Targets to Produce 1 Billion COVID-19 Vaccine Doses a Year.

The lockdown organisers include members of both far-right and far-left organisations, who have alleged a ploy behind the continued restrictions which have put a regulation of normal life and civil liberties.

The protesters, which also included large number of anti-vaxxers, called the compulsory lockdown and mandatory vaccination programme a "violation of freedom and fundamental rights". They have demanded the Prime Minister to lift all the restrictions and allow life to proceed as it did till February this year.

Really PACKED in Trafalgar Square - all side streets too pic.twitter.com/iQXJwtgCFv

Pics From The Demonstration

Crowds Soaring With Every Anti-Lockdown Protest

The crowds get bigger at every protest.

More people are waking up.

Stand up and fight for your rights.

A section of the protesters, while speaking to the reporters, alleged a ploy of the establishment to mute their voices by terming them as conspiracy theorists. They claimed to represent 99 percent of the working class who wants the restrictions to be lifted, which will allow them to earn livelihoods.

Among the protesters spotted at the Trafalgar Square was Piers Corbyn, the brother of former Labour Party chief Jeremy Corbyn. He has been a strong votary of removing the curbs imposed to prevent COVID-19 transmission.

The fresh protests were triggered in response to the "rule of six" imposed by Johnson, which prevents more than six people being gathered at a public place -- protests are an exception. The government also announced the imposition of curbs each night after 10 pm, which would bar restaurants and bars to operate.

(The above story first appeared on LatestLY on Sep 26, 2020 06:12 PM IST. For more news and updates on politics, world, sports, entertainment and lifestyle, log on to our website latestly.com).