Ukrainian and Russian delegations have held three rounds of peace talks in-person in Belarus since February 28, and the fourth one started on March 14 in a format of video conference. 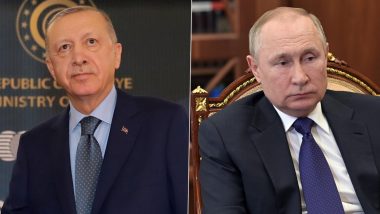 The two leaders had a phone conversation on Sunday and discussed the latest situation in the Russia-Ukraine conflict and the negotiation process, the Turkish presidency added in a statement. India-Pakistan Dialogue: 'Talks With Pakistan Can Be Held Only When Guns Fall Silent', Says Union Minister Jitendra Singh.

The two leaders "agreed that the next meeting of the negotiation teams of Russia and Ukraine will be held in Istanbul," the statement said.

During the conversation, Erdogan told Putin that a ceasefire and peace between Russia and Ukraine must be achieved as soon as possible and the humanitarian situation in the region should be improved, adding that Turkey would continue to "contribute in every possible way during this process."

Earlier on Sunday, David Arakhamia, a member of the Ukrainian delegation, said the next round of peace talks between Ukraine and Russia will take place next week in Turkey, Xinhua news agency reported.

"Today, at the video talks, it was decided to hold the next live round by two delegations in Turkey on March 28-30," Arakhamia wrote on Facebook.

Ukrainian and Russian delegations have held three rounds of peace talks in-person in Belarus since February 28, and the fourth one started on March 14 in a format of video conference.

The meeting, held on the sidelines of the Antalya Diplomatic Forum, was the first high-level talks between Moscow and Kiev since Russia launched a special military operation in Ukraine on February 24.

During the meeting, the two sides failed to make progress on a ceasefire but agreed to continue negotiations over the conflict.

(The above story first appeared on LatestLY on Mar 28, 2022 08:41 AM IST. For more news and updates on politics, world, sports, entertainment and lifestyle, log on to our website latestly.com).