A Russian writer has nominated President Vladimir Putin for the Nobel Peace Prize 2021. 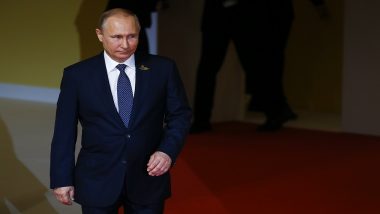 Moscow, September 24: A Russian writer has nominated President Vladimir Putin for the Nobel Peace Prize 2021. Sergey Komkov said he had sent a proposal to the Nobel Committee, nominating Vladimir Putin for the 2021 Peace Prize, Sputnik News reported on Thursday. "It was sent on 9 September, and on 10 September, the Nobel Committee headquarters in Oslo received it," Sergey Komkov was quoted as saying. What is Ig Nobel Prize? Know All About The Award That Has Winners Like Indian PM Narendra Modi, US President Donald Trump And Others.

Kremlin also reacted to Putin's nomination. "You know that absolutely different people are being nominated for this prize. These are initiatives of those putting forward relevant proposals. In this case, of the writer that you mentioned. There is a certain procedure of considering nominees. If such a decision is made, it will be great, if it is not, it will not be a problem. It is hard to say anything else," Kremlin spokesman Dmitry Peskov told reporters.

Earlier this month, US President Donald Trump was nominated for the 2021 Nobel Peace Prize for helping broker peace between Israel and the United Arab Emirates (UAE). Trump was nominated by Christian Tybring-Gjedde, an ultra-conservative member of the Norwegian Parliament, who praised Trump for his efforts towards resolving conflicts worldwide.

Nobel nominations can be made by national lawmakers, heads of state and certain international institutions. For Nobel Prize 2020, the committee received 318 nominations for the Nobel Peace Prize, of which 211 are individuals and 107 are organisations. The 2020 winner will be announced on October 9. The process of considering candidates and awarding the Nobel Peace Prize is done in Norway, in contrast to the other Nobel Prizes, which are awarded in Sweden.

(The above story first appeared on LatestLY on Sep 24, 2020 09:13 PM IST. For more news and updates on politics, world, sports, entertainment and lifestyle, log on to our website latestly.com).