What is Ig Nobel Prize? Know All About The Award That Has Winners Like Indian PM Narendra Modi, US President Donald Trump And Others

Prime Minister Narendra Modi has been awarded the Ig Nobel Prize for 2020 for his contributions to medical education. 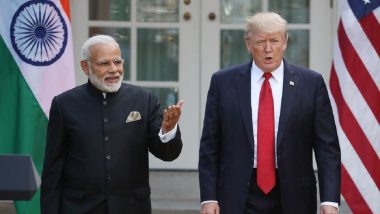 New Delhi, September 21: Prime Minister Narendra Modi has been awarded the Ig Nobel Prize for 2020 for his contributions to medical education. The award is given to PM Narendra Modi for "using the COVID-19 pandemic to teach the world that politicians can have a more immediate effect on life and death than scientists and doctors can". He is the second Indian Prime Minister after Atal Bihari Vajpayee to receive the satirical award. Donald Trump Nominated for Nobel Peace Prize 2021 for Peace Agreement Between Israel and UAE.

What is the Ig Nobel Prize?

The Ig Nobel Peace Prize has been awarded jointly to the governments of India and Pakistan for "having their diplomats surreptitiously ring each other’s doorbells in the middle of the night, and then run away before anyone had a chance to answer the door."

(The above story first appeared on LatestLY on Sep 21, 2020 10:46 AM IST. For more news and updates on politics, world, sports, entertainment and lifestyle, log on to our website latestly.com).