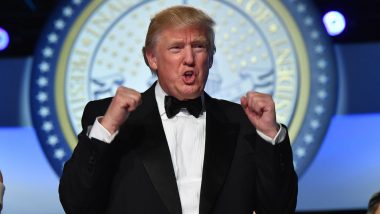 Washington, September 9: United States President Donald Trump has been nominated for a Nobel Peace Prize 2021. He has been nominated for the 'historic peace agreement' between Israel and the United Arab Emirates (UAE). Reports inform that Trump was nominated by was nominated by Norwegian MP Christian Tybring-Gjedde. The 57-year old leader, who is is a right-wing member of the Norwegian Parliament,  lauded Trump's efforts towards resolving conflicts across the world.

Tybring-Gjedde was quoted by Fox News saying, "For his merit, I think he has done more trying to create peace between nations than most other Peace Prize nominees,’  In his nomination letter, Gjedde said, ‘As it is expected other Middle Eastern countries will follow in the footsteps of the UAE, this agreement could be a game changer that will turn the Middle East into a region of cooperation and prosperity.’ Israel-UAE Peace Agreement: US President Donald Trump to Host Signing Ceremony of Abraham Accord at White House on Sep 15.

(The above story first appeared on LatestLY on Sep 09, 2020 03:41 PM IST. For more news and updates on politics, world, sports, entertainment and lifestyle, log on to our website latestly.com).