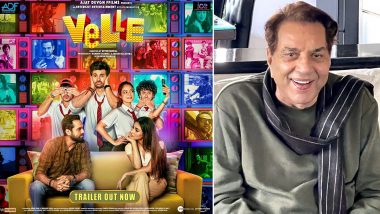 Veteran actor Dharmendra recently wished his grandson and actor Karan Deol good luck for his upcoming movie Velle, which also stars Abhay Deol and Mouni Roy. On Thursday, the Sholay actor took to his Instagram account and posted a photo of Karan, while wishing him and his costars good luck for the movie. Ghostbusters Afterlife Movie Review: Mckenna Grace and Paul Rudd-Starrer Is a Poignant Love Letter to Ghostbusters’ Legacy! (LatestLY Exclusive).

"Karan, Good luck to you, your co-Stars and the whole unit of VELLE. God willing it's a WIN - WIN. all our fan-friends are praying for us," he wrote. Karan had made his Bollywood debut with 'Pal Pal Dil Ke Paas' in 2019 and will now be seen in Velle. Produced by Ajay Devgn, the movie stars Karan, Abhay, Mouni, Anya Singh, Savant Singh Premi and Visshesh Tiwari. It is being directed by Deven Munja and is a story about three friends. Aparshakti Khurrana Birthday: Did You Know The Actor Captained Haryana Under-19 Team?.

Velle is slated to hit theatres on December 10, this year. Meanwhile, Dharmendra will soon be seen in the upcoming movie 'Rocky Aur Rani Ki Prem Kahani'. The movie is being directed by Karan Johar and stars Alia Bhatt, Ranveer Singh, Jaya Bachchan and Shabana Azmi. Produced by Dharma Productions and Viacom 18, it is supposed to release in 2022.