Ghostbusters: Afterlife, written and directed by Jason Reitman, is a sequel and a soft reboot to the 1984 film Ghostbusters. The movie stars Carrie Coon, Finn Wolfhard, Mckenna Grace and Paul Rudd. The cast members of the original film also have cameos in the movie. 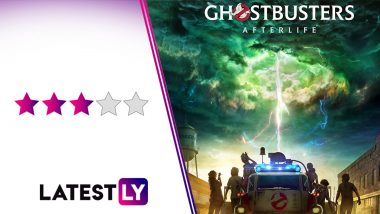 Ghostbusters Afterlife Movie Review: The 1984 movie Ghostbusters is one of the most beloved comedies in Hollywood. The sequel not so much. The 2016 reboot is one of the most reviled comedies in the last 10 years. And now we have Ghostbusters: Afterlife that acts as a sequel to the original as well as a soft reboot, while also serving as a tribute to the legacy of the saga. So if you love Ghostbusters, that was directed by the late Ivan Reitman, you might not mind Ghostbusters: Afterlife, that is directed by his son Jason Reitman, known for making acclaimed films like Thank You For Smoking, Up In The Air and Juno. Ghostbusters Afterlife: Jason Reitman’s Film To Release In Indian Theatres On November 19; Check Out The New Poster.

But if you are expecting a roaring comedy like the original, then forget it. The trailer was a hint enough that Ghostbusters: Afterlife is veering away from the madcap tone of the original. It is funny, and it has Paul Rudd, the second Avengers actor after Chris Hemsworth to be the funniest thing in a Ghostbusters reboot. The humour, however, isn't the slapstick kind, but the soft variety that Jason Reitman's films are known for.

Therefore, the primary factor whether you would want to like Ghostbusters: Afterlife is whether you are okay with this kind of stepped down humour. If yes, then let's move ahead. But before I get to the next bone of contention, let me brief you on the plot. Callie (Carrie Coon), a single unemployed mother and her kids, elder son Trevor (Finn Wolfhard) and younger daughter Phoebe (Mckenna Grace), find out that they they have inherited a house from Callie's father who had abandoned her when she was a child.

This decrepit house is in a sleepy town called Summerville, that in their own words, is in the middle of nowhere. While Callie is annoyed with her inheritance and still seething about her father, Trevor meanwhile develops a crush on a local girl Lucky (Celeste O'Connor).

As for the nerdy Phoebe, she discovers some strange secrets about her bizarre grandfather, and with the help of her new friend 'Podcast' (Logan Kim) and scientist teacher Gary Grooberson (Paul Rudd), uncover the existence of entities of other realms.

Ghostbusters: Afterlife is certainly an improvement on the 2016 reboot, which while had a supremely funny cast, was let down by its lazy script. Ghostbusters: Afterlife, written by Reitman and Gil Kenan, works more as decent ode to what Ghostbusters meant for its fans, especially for Reitman. A nostalgic trip that doesn't try too hard, but works well to not be insufferable. At the same time, it tries to make itself distinct from the original, until it gives up and then then goes back to the original formula. Ghostbusters Afterlife Early Reviews: Jason Reitman’s Sequel Declared As ‘Nostalgic and a Solid Continuation’ of the Original Films.

While Ghostbusters had four heroes - though Bill Murray's Pete Venkman always ended up being a scene-stealer - here, Phoebe becomes the de-facto main face, and the most well-written character. While we have other characters suit up and become 'Ghostbusters' towards the end, that felt more of sticking to the original than a natural affair, and makes you wonder how the uniforms even fit those kids. Mckenna Grace, a very fine performer, is easily capable of shouldering the entire movie, which gives us less opportunities to crib about when Ghostbusters: Afterlife scrim through some sticky portions. Though, she does borrow some traits of the lead character in the show she starred in - Young Sheldon. Interestingly, Annie Potts, who played Janine Melnitz in the OG movies and has a cameo here, is now known for playing Meemaw in the same series. Logan Kim as the geeky vlogger is an absolute scene-stealer, having great chemistry with Grace. Rudd's comic charms work like a magic. Actor Paul Rudd Named People's Sexiest Man Alive 2021.

The rest of the characters, however, don't get much scope to make an indelible impression. Coon, Wolfhard and O'Connor are all good, but their characters aren't as developed as that of Grace's.

Ghostbusters: Afterlife also suffers from tonal issues. It occasionally veers into Stranger Things territory - which is ironic, because Stranger Things (also starring Wolfhard) also loves to play tribute to Ghostbusters - and at times, it tries to stick to the madcap silliness of the original movies. It becomes a strange concoction whose ingredients struggle to blend well. While Reitman manages to throw in enough homages to the OG movies, Ghostbusters: Afterlife finds it difficult to gain its own identity, and the post-credit scenes make you wonder if there is even an intention to do so. Some of the threads are left hanging. Like the deal with Celeste's sheriff father (Bokeem Woodbine), who is not seen anywhere when the action is thick. Or what about that kid who was eavesdropping to Phoebe explaining the strange happenings of the town to her brother and his girlfriend? That lead to nowhere!

The movie also takes time to heat up on the action. When it does, Ghostbusters: Afterlife is fun, like the first time Phoebe and Co chase a ghost across the town. Or the action-packed finale that brings in some surprises (or not, it was kinda predictable). There is one moment that would definitely leave the fans of Ghostbusters moist-eyed, but the CGI used here has often in the past raised questions on its moral implications.

PS: Why is JK Simmons wasted in such a weak cameo?

- Decent Ode to the Original

- Struggles to Have Its Identity in Its Myriad of Homages

Ghostbusters: Afterlife is occasional fun, has enough lovely homages, but feels more of a placeholder in case the OG Ghostbusters return for one last hurrah. While it has its moments that make you laugh and be sentimental, and the CGI is good, this isn't one of Jason Reitman's best efforts, even if it is a poignant love letter to one of his father's most beloved works.

(The above story first appeared on LatestLY on Nov 18, 2021 11:48 AM IST. For more news and updates on politics, world, sports, entertainment and lifestyle, log on to our website latestly.com).