Seems like both the American stars, Kim Kardashian and Kanye West have decided to move on as after Kanye started dating model Irina Shayk, Kim is also finding a man to 'to share her life with'. 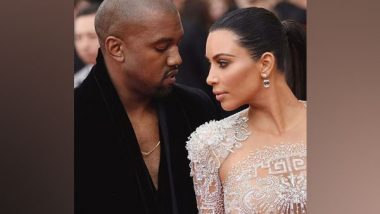 Washington [US], June 11 (ANI): Seems like both the American stars, Kim Kardashian and Kanye West have decided to move on as after Kanye started dating model Irina Shayk, Kim is also finding a man to 'to share her life with'.

According to People magazine, the reality TV star is open to finding love again after her third marriage failed with Kanye West.

A source close to the 'Keeping Up With The Kardashians' star told People magazine that Kim "wants to date as she doesn't see herself being single for the rest of her life."

"Her priorities are her kids and work, but she would love to find a guy to share her life with," the source added.

Kardashian and the 44-year-old rapper tied the knot in Italy in 2014 after dating for two years. They share four children together- daughters North, Chicago, and sons Saint, Psalm.

The couple parted ways after nearly seven years of their marriage as they endured some issues in their personal lives, which they were unable to resolve. During that period, Kanye exposed intimate family information across social media handles following which, this February, Kim filed for divorce.

Nearly after four months of their separation, Kanye has started dating model Irina Shayk. The two were even spotted hanging out together on the rapper's 44th birthday. Irina shares her 4-year-old daughter Lea with ex Bradley Cooper with whom she split in 2019 after being together for four years.

On Thursday, a source told People magazine that Kim knows about Kanye's new romance with Shayk "for weeks" and that it "doesn't bother" her as "her only concern is their kids. She wants Kanye to be present and spend as much time with them as possible."

Kim Kardashian's split from Kanye West marks her third divorce as she was previously married to Damon Thomas from 2000 to 2004 and parted ways with ex Kris Humphries in 2011 after 72 days of marriage. (ANI)