Megan Fox and Machine Gun Kelly got engaged on January 11 this year. The video shows Kelly getting down on one knee in a location special to the couple as Fox stood in shock with her hands over her mouth. 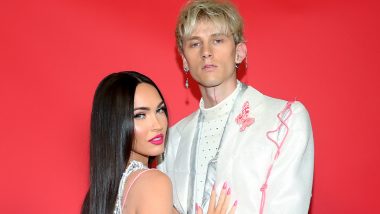 Washington, January 13: Thursday morning started on a great note for Megan Fox and Machine Gun Kelly's fans as the couple officially announced their engagement on their respective social media handles. "In July of 2020 we sat under this banyan tree. We asked for magic. We were oblivious to the pain we would face together in such a short, frenetic period of time. Unaware of the work and sacrifices the relationship would require from us but intoxicated off of the love. And the karma," Fox wrote. Megan Fox And Machine Gun Kelly Are Engaged! Actress Shares Video Of The Romantic Proposal (WATCH).

Alongside the note, she posted a video of the romantic proposal. The two got engaged on January 11 this year. The video shows Kelly getting down on one knee in a location special to the couple as Fox stood in shock with her hands over her mouth. "Somehow a year and a half later, having walked through hell together, and having laughed more than I ever imagined possible, he asked me to marry him. And just as in every lifetime before this one, and as in every lifetime that will follow it, I said yes ... and then we drank each other's blood. 1.11.22," she added.

On the other hand, Kelly shared a video of Fox's engagement ring and wrote, "yes, in this life and every life beneath the same branches we fell in love under, I brought her back to ask her to marry me." He also talked about the details of the ring, revealing how it represented "two halves of the same soul." Machine Gun Kelly Proposes Megan Fox With A Custom-Made Engagement Ring, Shares Meaning Behind The Sparkling Two-Stone Ring (Watch Video).

For the unversed, Fox was previously married to actor Brian Austin Green, with whom she shares three children. Kelly is a father to 12-year-old daughter Casie.