Quantum Leap Sequel in Works; Scott Bakula and Dean Stockwell's 1989 Show to Get a Reboot at NBC

NBC has greenlit the long-rumoured return of 1989 sci-fi TV series Quantum Leap, which starred Scott Bakula and Dean Stockwell in the lead roles. 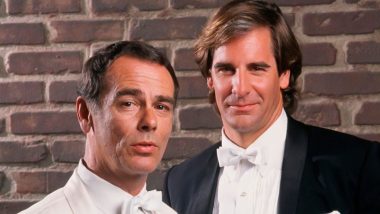 NBC has greenlit the long-rumoured return of 1989 sci-fi TV series Quantum Leap, which starred Scott Bakula and Dean Stockwell in the lead roles. As per The Hollywood Reporter, NBC is developing the sequel pilot to the 1989 time-travel adventure drama that ran for five seasons on the network. Cardi B Says She Felt ‘Extremely Suicidal’ as She Testifies Against YouTuber in Libel Trial.

Reportedly, Scott Bakula may be also involved in the project, which is set 30 years after the original series. The synopsis of the series obtained by The Hollywood Reporter read, "It's been 30 years since Dr Sam Beckett (Scott Bakula) stepped into the Quantum Leap accelerator and vanished. Now a new team has been assembled to restart the project in the hopes of understanding the mysteries behind the machine and the man who created it."  Real Steel Series in Works at Disney+; TV Adaptation of Hugh Jackman’s 2011 Movie.

In September, Bakula himself teased "significant conversations" about a revival were happening. "There are very significant conversations about it right now going on. I don't know what it would be. I don't know who would have it. The rights were a mess for years. I don't know if they're even sorted out now. That's always been the biggest complication," said Bakula, who played a physicist who involuntarily time travels and fixes mistakes of the past by leaping into the bodies of others.

Creator Don Bellisario is on board for the revival as an executive producer. Steven Lilien and Bryan Wynbrandt (Gotham) are showrunners. Deborah Pratt and Martin Gero are also executive producers. The project is for series consideration next year and produced by Universal Television.