Bollywood actor Sidharth Malhotra and filmmaker Karan Johar were spotted at an event held for the launch of the book Modi@20: Dreams Meet Delivery in New Delhi recently. 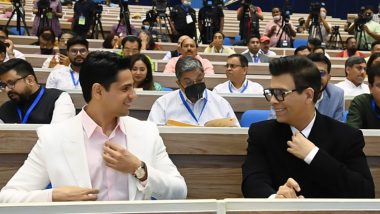 Bollywood actor Sidharth Malhotra and filmmaker Karan Johar were spotted at an event held for the launch of the book Modi@20: Dreams Meet Delivery in New Delhi recently. On Wednesday, the book was launched at a grand event by Vice President Venkaiah Naidu at Vigyan Bhawan, New Delhi. The book is written by intellectuals and eminent citizens on Prime Minister Narendra Modi's 20 years in public life. Sidharth Malhotra And Kiara Advani Spotted Together At Arpita Khan–Aayush Sharma’s Eid Party Amid Break Up Reports (Watch Video)

At the event, Sidharth and Karan could be seen greeting Mukhtar Abbas Naqvi, the Union Minister of Minority Affairs. In another picture, Sidharth and Karan were spotted interacting with Union Sports Minister Anurag Thakur. Sidharth opted for a white blazer over a light pink shirt. On the other hand, Karan was spotted sporting a black suit with his retro-oversized spectacles. Sidharth Malhotra Shares a Sexy Side Profile Picture in Causal Avatar Along With a Kickass Message Straight from Istanbul!.

The event was graced by Union External Affairs Minister S Jaishankar, Union Home Minister Amit Shah and Union Sports Minister Anurag Thakur. Along with other dignitaries boAt Ceo, Aman Gupta marked his presence at the event. For the unversed, Sidharth has a lot of projects in his kitty including 'Mission Majnu' and 'Yodha'. Helmed by Shantanu Bagchi, 'Mission Majnu' set in the 1970s has Sidharth essaying the role of a RAW agent who led a covert operation on Pakistani soil.

Check Out the Stills From the Event

The film also marks the Hindi debut of Rashmika Mandanna. Speaking of 'Yodha', it is touted as an action film. Disha Patani and Raashii Khanna will share screen space with Sidharth in the project.