Get latest articles and stories on Entertainment at LatestLY. The first poster of 'The Archies', which is directed by Reema Kagti and Zoya Akhtar, is finally here. The movie will premiere exclusively on Netflix and will be released in 2023. 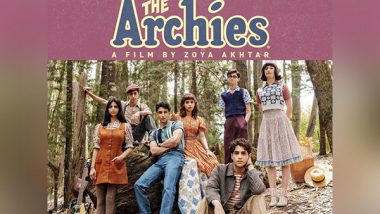 Mumbai (Maharashtra) [India], May 14 (ANI): The first poster of 'The Archies', which is directed by Reema Kagti and Zoya Akhtar, is finally here. The movie will premiere exclusively on Netflix and will be released in 2023.

The cast of Netflix and Tiger Baby's new production, "The Archies," has been revealed. This musical drama, set in the 1960s, is directed by Zoya Akhtar and features an exciting new cast.

Also Read | Karan Kundrra Registers for His Dream House in Bandra With More Than Rs 20 Crore!.

On Saturday, May 14, Netflix India's official Instagram account published the first-look poster and a short teaser of the movie. The poster features the whole 'Archies' gang, posing in a woodland environment in 1960s outfit.

Sharing the poster, they wrote, "Grab your picnic baskets and pick out your cutest outfits, we're going to greet Archie's gang.Presenting the cast of THE ARCHIES, a Zoya Akhtar film."

While they captioned the video as, "The sun is out, the news is out! Come meet your new friends.Presenting to you the cast of The Archies, directed by the fantastic Zoya Akhtar."

Mihir Ahuja, Dot, Khushi Kapoor, Suhana Khan, Yuvraj Menda, Agastya Nanda, and Vedang Raina will play pivotal roles in the film. The seven young performers will portray well-known characters from Archie Comics. The trailer, which features the characters and a catchy music track by Ankur Tiwari and the Islanders, gives viewers a glimpse into the universe that Akhtar promises to bring to life for them. (ANI)