Get latest articles and stories on Entertainment at LatestLY. The first trailer of actor Tyler Perry's upcoming Netflix film, 'A Madea Homecoming', is finally out. 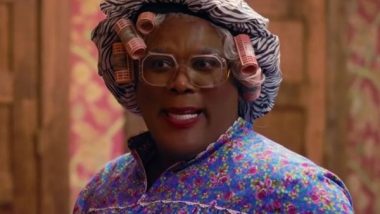 Washington [US], January 27 (ANI): The first trailer of actor Tyler Perry's upcoming Netflix film, 'A Madea Homecoming', is finally out.

The actor, who will be seen reprising his role of the iconic character Madea, a tough elderly woman in the film, shared the trailer on his Instagram account.

Along with unveiling the trailer, he wrote, "When I tell you I want you to laugh so hard that you can't stop! I MEAN IT! We've been going through too much in this world! All I want this movie to do is just make you laugh out loud for real! Coming on February 25th to @netflix!"

Perry stars as Madea, a tough elderly woman in the film that "centres around Madea's great-grandson's college graduation, though the celebratory moment hits a halt as hidden secrets and family drama threaten to destroy the happy homecoming."

Also Read | Bobby Deol Opens Up About His 53rd Birthday Plans, Actor to Celebrate His Special Day With Customary Havan at Home.

The first film in his iconic, billion-dollar comedy franchise since 2019's 'A Madea Family Funeral' is also the first Madea film at Netflix after a 12-movie run at Lionsgate.

As per The Hollywood Reporter, Perry has earlier said that Madea is based on his mother and aunt, and introduced the character in his 1999 play 'I Can Do Bad All by Myself.'

The character made her cinematic debut in 2005's 'Diary of a Mad Black Woman,' which was followed up by 2006's 'Madea's Family Reunion' and nine more films that have collectively grossed more than USD 500 million.

'A Madea Homecoming' will premiere on February 25 on Netflix. (ANI)