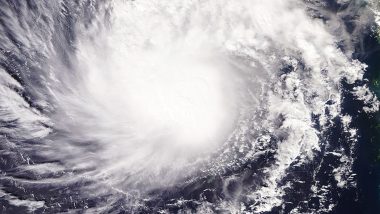 New Delhi November 3: According to the India Meteorological Department (IMD), under the influence of Severe Cyclonic Storm 'Maha', heavy rainfall is likely over Gujarat and Saurashtra coasts on Sunday. The weather forecast agency also predicted that under the influence of the low-pressure area over the Andaman Sea, heavy to very heavy rainfall at isolated places is very likely over Andaman and Nicobar Islands from November 3 to 6. Cyclone Maha Update: Heavy Rainfall Likely in Parts of Maharashtra, Gujarat Over Next 48 Hours.

"It is very likely to move west-northwestwards till November 4 and recurve east-northeastwards towards south Gujarat and adjoining north Maharashtra coasts thereafter," the IMD stated in its All India Weather Forecast Bulletin.It is very likely to intensify into a Very Severe Cyclonic Storm over the east-central Arabian sea during the next 12 hours. Cyclone Maha Likely to Recurve Towards Gujarat by November 5, Heavy Rainfall to Lash Parts of Gujarat, Maharashtra and Goa, Says IMD.

However, after the re-curvature, it is very likely to weaken gradually while moving east-northeastwards.The organisation has advised fishermen not to venture into central and northeast Arabian Sea for the next couple of days.