Get latest articles and stories on Health at LatestLY. According to a recent study, infusions of the local anaesthetic lidocaine may provide pain relief to people with chronic migraine who haven't responded to other treatments. 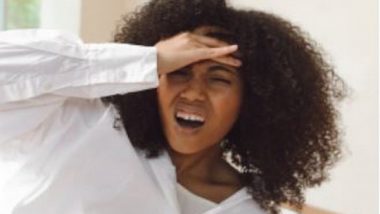 London [UK], May 29 (ANI): According to a recent study, infusions of the local anaesthetic lidocaine may provide pain relief to people with chronic migraine who haven't responded to other treatments.

The findings of the research were published in the journal 'Regional Anesthesia & Pain Medicine'.

Intravenous infusions of a local anaesthetic such as lidocaine have been suggested as a possible treatment option for people who have a poor quality of life because of chronic migraine which is difficult to treat.

The aim is to 'break the cycle' of pain, but few studies have looked at the effectiveness of this treatment beyond immediate pain relief.

In this retrospective study, the authors analyzed the hospital records of 609 patients who were admitted with refractory chronic migraine and treated with infusions of lidocaine to assess the short- and medium-term benefits of this approach.

Patients included in the analysis had experienced at least 8 debilitating headache days per month for at least 6 months and failed to respond to or had contradictions to the seven classes of medicine for migraine.

Patients received lidocaine infusions over several days along with other aggressive drug treatments for migraine, such as ketorolac, magnesium, dihydroergotamine, methylprednisolone, and neuroleptics. Most patients (87.8 per cent) experienced rapid pain relief. At the time of admission, the median rating given by patients was 7.0 and this decreased to 1.0 by the time of hospital discharge.

Patients attending follow up appointments around one month after discharge also reported that the number of headache days that they experienced had fallen. The 266 patients who attended these appointments, which took place between 25 and 65 days after discharge, said that the number of headache days in the last month had fallen from a mean of 26.8 to 22.5.

Some patients experienced nausea and vomiting during the treatment but all adverse events experienced were mild. This is an observational study, and as such, can't establish cause and the authors also highlight some limitations. Most importantly, not all patients completed follow-up visits, but they add that in their experience these were likely to be patients who responded well.

In addition, some patients were included in the analysis more than once because they were admitted on multiple occasions, and while unlikely, it is possible, that hospitalisation itself could have contributed to pain relief.

The authors conclude, "Continuous lidocaine infusions were associated with improvement in acute pain in most patients and a decrease in both average pain and the number of headache days per month that extended out to 1 month. Most patients were acute responders, 43 per cent of whom maintained improvement at 1 month and were sustained responders."

They add, "Lidocaine may be a viable treatment option for patients with refractory chronic migraine who have failed other treatments. A prospective, randomized, double-blind trial is needed to confirm these results." (ANI)