To mark the completion of administering of 100 crore COVID-19 vaccine doses, the largest khadi tricolour in the country, weighing around 1,400 kg, will be displayed at the Red Fort on Thursday, official sources said. 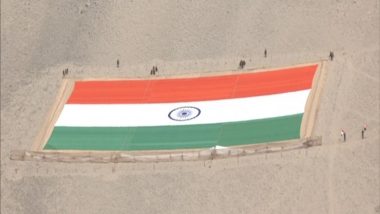 New Delhi, October 20: To mark the completion of administering of 100 crore COVID-19 vaccine doses, the largest khadi tricolour in the country, weighing around 1,400 kg, will be displayed at the Red Fort on Thursday, official sources said.

Union Health Minister Mansukh Mandaviya on Wednesday appealed to all those who are eligible to get inoculated without delay and contribute to the historic vaccination journey of India. Also Read | Nattaa: The Politically-Neutral Network Putting 'Social Back Into Social Media'.

To mark the milestone on the COVID-19 vaccination exercise, a series of events have been lined up. Mandaviya will launch a song by singer Kailash Kher and an audio-visual film at the Red Fort.

"The country is close to making a vaccine century. To be a part of this golden opportunity, I appeal to the citizens who are yet to be vaccinated to contribute to this historic golden vaccination journey of India by getting vaccinated immediately," he said in a tweet in Hindi.

SpiceJet will unveil a special livery at the Delhi airport to celebrate the 100 crore vaccine milestone on Thursday. The health minister, Civil Aviation Minister Jyotiraditya Scindia and SpiceJet CMD Ajay Singh will be present on the occasion.

Speaking about the flag, a source said, “The same 1,400-kg handwoven khadi tricolour, the largest in the country, which was unfurled in Leh to mark Mahatma Gandhi's 152nd birth anniversary and the 75th year of Independence will also be displayed at the Red Fort to mark the occasion (100 crore doses).”

The flag is the largest handwoven and handspun cotton khadi flag ever manufactured in India and it measures 225 feet by 150 feet, the source said

Mandaviya had earlier said that announcements will be made on airplanes, ships, metros and at railway stations when India achieves its target of administering 100 crore doses.

Celebrations will also be held at central government hospitals in the city to mark the occasion. The total vaccine doses administered in the country crossed 99.7 crore on Wednesday, according to the 10.50 pm data from the Co-WIN portal, with around 75 per cent of all adults having administered the first dose and around 31 per cent having received both doses.

"After 100 crore doses are administered, we will go in mission mode to ensure that those who have taken their first dose take their second dose too to ensure they are protected against COVID-19," Mandaviya had said.

The Centre has also said that all those villages which have completed 100 per cent vaccination should mark the 100 crore-doses administered achievement by putting up posters and banners complimenting health workers for their role in the exercise.