The Andhra Pradesh Government has decided to make 'English medium' compulsory across all government, private aided and unaided degree colleges across state from the academic year 2021-22. 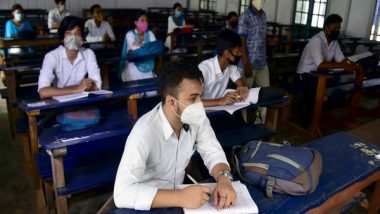 Amaravati, June 16: The Andhra Pradesh Government has decided to make 'English medium' compulsory across all government, private aided and unaided degree colleges across state from the academic year 2021-22.

As per the state government's release, the Department of Higher Education of Andhra Pradesh "strongly feels" that the introduction of English medium education at the undergraduate (UG) level would enhance the career prospects of graduates. CET Exam 2021 Date: Common Entrance Test Could Be Held by 1st Week of August, Says Maharashtra Minister Uday Samant.

"According to the findings in India Skills Report of 2019, English figured among the top three skills, along with learning agility and adaptability, that employers look for in India. Out of over 2.62 Lakh students who have taken admissions into degree colleges across the state, only 65,981 students are admitted into Telugu medium background during 2020-21. Out of 65981 Telugu medium students, 24007, 16925 and 24960 have enrolled themselves in BA, B.com and BSc courses respectively. This particular decision is bound to immensely benefit these students as well," the release said.

The state government cited a 2016 report of Cambridge University titled 'Findings of English at Work: Global analysis of language skills in workplace' which highlights that about 90 per cent of employers look for in India say that English language skills are important for their organization.

The government noted the language skill will help the students in the further studies as well as in finding employment in the future.

In order to facilitate a smooth transition, the Department of Higher Education has also introduced life skill courses like Personality development and leadership and Human values and Professional Ethics. Every student should mandatorily select at least one life skill course in the first two semesters and two in third.

"Curriculum is thoroughly revised with effect from 2020-21 with a mandatory internship for 10 months. 30 per cent of the revised curriculum consists of skilled oriented programs. The department is also developing spoken English courses at levels 1,2 and 3," the release added.