Get latest articles and stories on India at LatestLY. Criticising the Telangana Chief Minister K Chandrashekhar Rao's India tour, BJP MLA Etela Rajender on Saturday said he is visiting other places leaving farmers and people's issues here in the state. 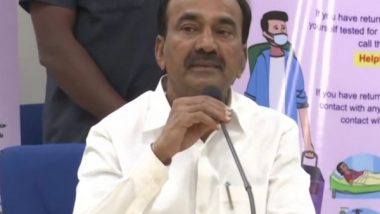 "The people of the state voted for KCR for good governance so that he can provide better health, education and welfare activities for people but he utterly failed in every aspect," the BJP leader said.

KCR, who is on a two-day visit to the national capital, accompanied Delhi Chief Minister Arvind Kejriwal to visit a Delhi government school in South Moti Bagh on Saturday.

Taking a dig at Rao, the BJP leader said KCR is nowhere concerned with national politics and has a responsibility to work here in Telangana but he left all his work and went to Delhi.

"The farmers' paddy issue has been kept in the Centre for one month, he left farmers aside and went there. Earlier, former chief minister of the state N Chandrababu Naidu also did the same mistake and was removed from power, he (KCR) will also face the same fate," Rajender said.

Lauding the Delhi government's efforts in the education sector, KCR said that they have transformed the aims of students from "job seekers" to "job providers". (ANI)