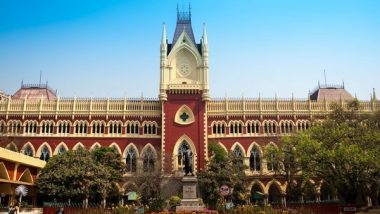 They were granted bail on the conditions that they were ought to submit a personal bond of Rs 2 lakhs and two sureties. As per the officials, they will join the investigation in this case via video conferencing. Till the time the investigation in this matter gets concluded, they will not give press interviews on pending trial on Narada case. Narada Scam: CBI Moves Supreme Court Against Calcutta High Court Order That Allowed House Arrest Of 4 TMC Leaders.

Earlier today morning, the Narada case hearing commenced at 11 am at Calcutta High Court. The five-judges' bench heard today the applications filed by them seeking recall of the order of staying the four TMC leaders bail on Narada related case.

On May 24, the Central Bureau of Investigation (CBI) had filed a Special Leave Petition (SLP) before the Supreme Court challenging the Calcutta High Court's order, which allowed the house arrest of four Trinamool Congress (TMC) leaders, who are accused in the Narada case.

The probe agency, CBI, in its appeal, filed before the apex court, had sought deferment of the larger Bench hearing, fixed for today before the five-Judge Bench of the Calcutta High Court.

The Calcutta High Court, in its order recently on May 21, had allowed four TMC leaders, including two sitting ministers, accused in the Narada case, to be granted bail, and to be kept under house arrest. It had referred the bail pleas of these four leaders to be heard by a five-judge bench after the split verdict was passed by the two-Judge bench.

The Narada sting operation was conducted by Narada news founder Mathew Samuel for over two years in West Bengal. Conducted allegedly in 2014 for the news magazine Tehelka, it was published on a private news website Narada News months before the 2016 West Bengal Assembly elections.

The case is related to a sting operation, commonly known as Narada Sting Operation, in which these former public servants were caught on camera while receiving illegal gratification from the Sting Operator, Samuel.