India News | Centre Asking Telangana to Impose Electricity Bills on Farmers, Will Die but Not Do So, Says KCR

Get latest articles and stories on India at LatestLY. Telangana Chief Minister K Chandrashekar Rao on Sunday hit out at the Centre on the issue of farmers alleging that it asked the state government to impose electricity bills on farmers who are being given free electricity in the state. 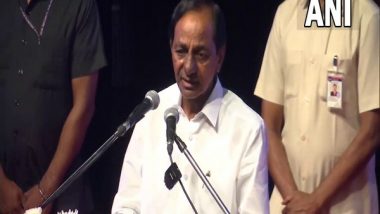 Chandigarh (Punjab) [India], May 22 (ANI): Telangana Chief Minister K Chandrashekar Rao on Sunday hit out at the Centre on the issue of farmers alleging that it asked the state government to impose electricity bills on farmers who are being given free electricity in the state.

The Chief Minister said that he would "die but not do so".

KCR, who is on a national tour to various places in a bid to meet the leaders of the regional parties attempting to seek support for an alternative front to the BJP and Congress, visited Punjab after New Delhi where he spent the entire day on Saturday.

"Before Telangana became a state, a lot of farmer issues persisted. Farmers were dying by suicide. We are improving, giving farmers free electricity. Centre asking us to impose electricity bills, put meters. We would die but not install meters," he said.

Recalling Delhi Chief Minister Arvind Kejriwal's support to the farmers who sat on the national capital's borders protesting against the three farm laws (which are now withdrawn), KCR said that the AAP supremo is "lucky" to have got a chance to serve them (farmers).

"Delhi CM Kejriwal is lucky that he got a chance to serve farmers as they sat on Delhi's borders. We too would always support our farmer brothers and sisters. We cannot bring back those who have died but we are with you in this pain," he said.

Meanwhile, Kejriwal also hit out at the Centre alleging that the government wanted to "covert the stadiums into jails" for the farmers who were agitating against the laws.

"The farmer's agitation was for the entire country not just for the farmers of Punjab or Haryana. The Central government wanted to convert stadiums into jails to arrest them, but I did not give permission for this," Kejriwal alleged.

Earlier today in Chandigarh, Kejriwal, Punjab CM Bhagwant Mann and KCR paid tributes to the soldiers who lost their lives in the Galwan Valley, Ladakh, and farmers who died during the recent 'Kisan Andolan'.