Thrikkakara Bypolls 2022: Aam Aadmi Party and Kerala-Based Twenty20 Not To Support Any Front

The leaders in the joint press conference, however, said the victory and defeat of any candidate will be decided by the People's Welfare Front. 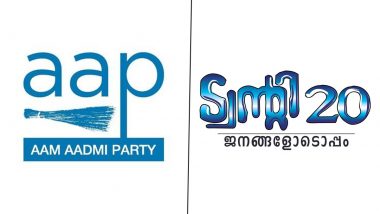 Thiruvananthapuram, May 22: The Aam Aadmi Party and Kerala-based Twenty20 have announced that they will not be extending support to any front in the ensuing Thrikkakara bypolls.

Delhi Chief Minister and AAP National Convenor, Arvind Kejriwal had during a public meeting in Kizhakkambalam, the headquarters of Twenty20 announced that the two would form an alliance, 'Peoples welfare alliance'. Turkey Blackmails NATO, Being Only Country Benefiting From the Ukraine War.

The AAP Kerala state convenor and former Additional Chief Secretary of Tamil Nadu, P.C. Cyriac and Twenty20 Chairman Sabu Jacob in a joint press conference said that they will not extend support to any front.

The leaders in the joint press conference, however, said the victory and defeat of any candidate will be decided by the People's Welfare Front.

The leaders also said that the workers and sympathisers of the alliance would vote after studying the situation clearly.

In the 2021 Assembly elections, Twenty20 had garnered 13,486 votes in Thrikkakara Assembly constituency.

The bypoll was necessitated after the sitting legislator P.T. Thomas of the Congress passed away. His wife Uma Thomas is contesting the election as the United Democratic Front (UDF) candidate.

The ruling Left Democratic Front (LDF) has sprung a surprise by fielding a prominent cardiologist of Kochi, Dr. Jo Joseph as its candidate. The NDA fielded veteran leader and former 'pracharak' of the RSS, A.N. Radhakrishnan, who is also the senior Vice President of the Kerala BJP.

(The above story first appeared on LatestLY on May 22, 2022 05:54 PM IST. For more news and updates on politics, world, sports, entertainment and lifestyle, log on to our website latestly.com).