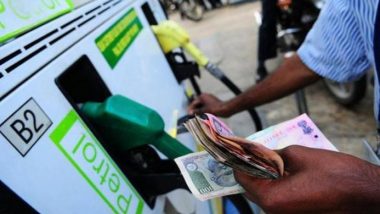 New Delhi, April 2: Fuel prices continued to maintain an upward trend with petrol and diesel rates hiked by another 80 paise per litre each on Saturday, compounding an increase of about Rs 7.20 a litre in ten revisions in 12 days so far. In the national capital, the petrol price is now 102.61 per litre while diesel is selling at Rs 93.87 per litre. In Mumbai, the petrol and diesel prices have gone up by 85 paise, to Rs 117.57 and Rs 101.79 per litre respectively.

In Chennai, the petrol and diesel prices are at Rs 108.21 and Rs 108.21 per litre (increased by 76 paise). In Kolkata, the price of petrol is Rs 112.19 (increased by 84 paise) and diesel is Rs 97.02 (increased by 80 paise). There had been a pause in the revision of fuel prices since November 4 last year, which was broken on March 22, following the prices of crude oil going upwards in the wake of the Russian military operations in Ukraine. Fuel Price Hike: Petrol, Diesel Prices Up by 80 Paise Each; Ninth Rise in 10 Days.

Notably, on November 3 last year the Centre had cut excise duty by Rs 5 per litre on petrol and Rs 10 per litre on diesel to bring down the retail prices across the country. Following this, several state governments had reduced Value-Added Tax (VAT) on petrol and diesel to provide relief to people.